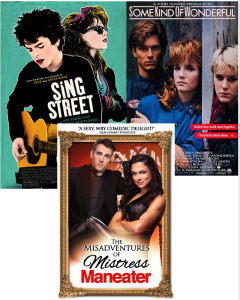 These terrific Rom-Coms take familiar genre tropes and spin them into something memorable, unique, and fun.

It’s that special time of year again, and here are three Rom-Coms that deserve a much closer look – these terrific films take familiar genre tropes & spin them into something wonderfully unique.”

This list’s only major studio feature, “Some Kind of Wonderful” is considered John Hughes’ penance to those who wanted “Pretty in Pink” to end differently. The characters have more depth and their relational struggle feels more authentic.

Eric Stolz as Keith is dynamic, and Mary Stuart Masterson shows what it must have been like to be quirky in the 1980’s. The blue collar vs. wealthy theme is strong throughout. However, Craig Sheffer’s Hardy is not a jerk because just because he’s rich. He is a jerk because people have long enabled him by looking the other way. Lea Thompson’s aloof Amanda is more of a mirror into the kind of person Keith is deciding to be and pursue, so her portrayal works.

In a bit of a letdown, the producers do much to sell out Hughes’ vision, as the movie tries to not upset its corporate masters. If viewers can get past that and absorb the characters’ warmth and humanity, they will find an enduring love story. For the ending to work, a viewer has to believe two teens learned how to love themselves simultaneously, and much of the film’s sweetness may be found in its naivete. 4/5 stars.

“The Misadventures of Mistress Maneater” not only compels viewers to root for its main characters, but the film also breaks new ground in subject matter, using cinematic creativity rarely seen in independent films.

It starts with an excellent, truly humorous script, penned by its multi-talented star, Lorrisa Julianus. Director C.J. Julianus makes creative use of allegorical locations, allowing our heroine to explore her world with confidence and vulnerability.

In falling for Ava, Mickey O’ Sullivan’s Radovan finally forgives and accepts himself, a tall order given his disturbing history.

This is a love story where the individual protagonist’s self-actualization comes before the romance, and the relationship feels earned.

There is a lot going on and the action never wavers, a perfect film for those who love rom-coms, but fall asleep at the sight of Julia Roberts. 4.5/5 stars.

“Sing Street” is a British film that overflows with talent and heart. The love story is subtle, involving more than just a young man and young woman. Some of the most brilliant actors come from the U.K., and Ferdia Walsh-Peelo and Lucy Boynton hold a viewer’s attention with words left unsaid, which is an underrated talent that they both possess.

Peelo’s Conor falls in love instantly with Boynton’s Raphina, and decides to build a band on the spot to impress her. He also takes that opportunity to build bonds for others as well. She catapults him into the kind of person he needs to be to survive. Raphina may be a true love, but she is also a reminder of his own worth as a person, which he spends most of the film trying to project onto those around him.

Ultimately the film’s message is of loyalty, faith, and escape, and the unforgiving affliction of self-doubt.

It isn’t important that Conor becomes a star, even though he will eventually get to the top. What’s important is that he runs forward as fast as he can, with his love by his side. We don’t learn if they will run at different speeds successfully, but we do know the only turning back they will do is to pick each other up. 4.5/5 stars.

These unexpected gems are highly recommended this Valentine’s season, with each offering delightful twists and masterful story-telling.

So break out a bottle of your favorite wine, snuggle up and enjoy these surprising and unique film romances!