“Wild’n” by OG Rome, aka Mr.Everywhere, is taking the Music Industry by Storm 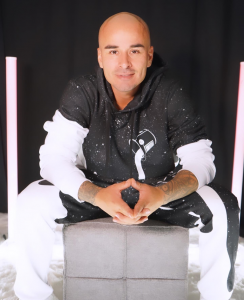 Fans are trending his song with hashtag #wildnchallenge”

INGLEWOOD, CALIFORNIA, UNITED STATES, January 14, 2023 /EINPresswire.com/ — Latin recording artist Rigoberto Terriquez, also known as OG Rome aka Mr.Everywhere, has just released his latest single, “Wild’n,” under the label ‘Rowdoggs Entertainment.’ He is also the CEO of Rowdoggs Entertainment, a prestigious name in the music industry since its inception in 2008.

The song “Wild’n,” which has quickly gained popularity, is currently being played on KSCB 91.9 Fm in Santa Barbara, 94.1 Fm & 98.5 Fm in Los Angeles and has started a viral trend on TikTok and Instagram, with users posting videos of themselves dancing to the song and using the hashtag #wildnchallenge.

OG Rome, who was recently interviewed by King Tech on DaKingzTable, The Plug Radio, and Triunfo Magazine at the 2022 Latin Grammys in Las Vegas, has a style that is perfect for the radio and television. He is looking forward to hopefully being the first Latino artist to perform “Wild’n” on the Nick Cannon show Wild’n Out. The song will surely get listeners dancing with its uplifting and energetic beats.

Rowdoggs Entertainment, established in 2008 by OG Rome, has been a significant player in the music industry. Through Rowdoggs, OG Rome has worked with legends like Kurupt from DPG, Kokane, Rappin4Tay, Bo-Roc, Mellow Man ace, Kid Frost, and many more. The company also has its own podcast, Rowdoggs TV, where they interview mainstream and independent entertainers. OG Rome himself has performed at major venues such as the Los Angeles Convention Center, the Las Vegas Convention Center, The Queen Mary, The Globe Theater, Adelanto Stadium, KushStock, and the Cannabis Awards, among many others.

In 2023, OG Rome has teamed up with sponsorship from CalyFx, An award-winning cannabis and hemp manufacturer based out of California. He will be fully equipped with a two-story tour bus allowing fans to come on board, take pictures, get autographs, and buy merchandise. He also has an upcoming movie, “Mothers Love,” coming soon. You can find them on IG @calyfxus.

We encourage everyone to submit videos dancing to “Wild’n” using the hashtag #wildnchallenge. OG Rome’s music uplifts the spirit and brings people together, and we can’t wait to see how his fans interpret the song in their unique ways. Be sure to catch OG Rome on tour and follow Rowdoggs Entertainment for more updates on the artist and his upcoming projects. With the unique blend of Latin rhythms, upbeat energy, and OG Rome’s signature style, “Wild’n” is set to be a crowd-pleaser and a surefire hit for the summer. Fans of Latin music and those who enjoy upbeat, danceable tracks will not want to miss out on this exciting new release. Rowdoggs Entertainment, under the leadership of OG Rome, is proud to be behind this talented artist and is excited to see where his career will take him in the future.

“I’m so excited to finally release ‘Wild’n’ to the world,” said OG Rome. “It’s a song that truly captures the energy and spirit of my music, and I can’t wait for everyone to hear it and start dancing to it. I hope my fans enjoy it as much as I enjoyed making it.”

OG Rome, aka Mr.Everywhere, also known as Rigoberto Terriquez, is a Latin recording artist known for his upbeat and energetic music that uplifts the spirit and brings people together. Represented by Rowdoggs Entertainment, OG Rome has been a significant player in the music industry since 2008, performing at notable venues and collaborating with popular brands like CalyFx.