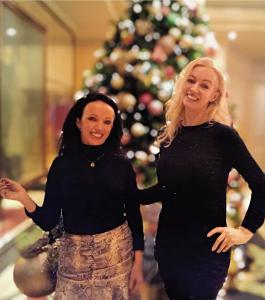 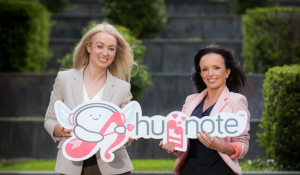 We’re delighted to be available in the UK this week with so many people unable to send Christmas cards. Plus we’re a much greener option with every HUGG sent instead of a card saving 140g CO2e”

Huggnote, a UK accelerator supported start-up that turns much-loved songs into eco-friendly virtual hugs has launched a ‘Merry Christmas’ release in the UK, which ensures well-wishers get to send heartfelt Holiday greetings to friends/family – amid postal strike chaos. The multi award-winning app which has users in 204 countries, enables UK users to say anything from ‘Missing You this Christmas’ to ‘Happy New Year’ by sending multi-sensory experiences called HUGGs – which are free to send to anyone, anywhere.

The multi award-winning app which has users in 204 countries, enables UK users to say Merry Christmas by sending songs as multi-sensory experiences called HUGGs – instantly delivered to anyone, anywhere.

Founded by Irish sisters Jacqui and Perry Meskell, Huggnote originated as a user-need when a friend of theirs was going through a tough time while away and a song on the radio brough back many happy memories. “I heard the song and thought that if only there was a way to ‘digitally gift-wrap’ and send it to my friend, it would say everything words couldn’t” says founder and CEO Jacqui. “And so that is what Huggnote does. We use music as the most powerful language on the planet to express any sentiment from ‘I Love You’ to ‘I’m Sorry’. Because music is so emotional. It’s a powerful re-kindler of memories and actually releases the same hormones as a physical hug” she says.

Huggnote is a web app so there’s nothing to download – designed to make sure that anyone, any age can easily send and receive HUGGs. “Users simply sign-up and choose from a curated list of songs for whatever you want to say – whether ‘Missing you this Christmas’ or Happy New Year‘, personalise with a message and send it as a ‘HUGG’ via text or messenger app” says Meskell. The recipient receives an alert they’ve been Hugged, which they can play straight away – whether they’re sign-up or not.

Huggnote also helps users dreaming of a green Christmas to offset their carbon foot-print – with 140g CO2 saved for every HUGG sent instead of a traditional Christmas card based on data from an Exeter University report on the environmental impact of greeting cards. It is estimated that some 1 billion Christmas cards are sent in the UK each year – accounting for almost half of the volume of all greeting card sales – most of which are discarded once the holidays are over. “It takes one tree to make just 3000 cards and so opting for a digital solution instead could save over 330,000 trees. And the best part is that unlike other digital solutions Huggnote still has all the sentiment of a physical card – just with no downside! It only takes seconds to send anywhere in the world – but it’s deeply personal and much more emotional, with users regularly telling us they were moved to tears by their HUGG.” she says.

Huggnote is an alumni of the UK based ‘Hotbed’ accelerator for early-stage start-ups in the UK and Ireland and was one of 160 start-ups chosen to present at the final demo day, at which the start-up won both audience votes for ‘Best Pitch’ and ‘Product Most Likely to Use’. The programme is run by respected UK entrepreneurship leaders Perdie Adler and Margaret Anne Coyle who are impressed with Huggnote’s success. “We created Hotbed to give start-ups, no matter where they’re based an equal chance of scaling and securing investment and we love Huggnote’s product,” says Adler “Jacqui and Perry are the perfect team to run it and they’ve shown incredible traction and growth, which is we selected them to pitch at our Demo Day this year,” says Coyle.

The founders are currently completing Hotbed’s new 10-week ‘Overrules’ programme for female entrepreneurs – supporting 200 female founded start-ups through workshops, pitch clinics and peer-to-peer sessions and will conclude with an IRL showcase event in London on January 14. “We’re so impressed with the start-up ecosystem in the UK” says Jacqui. “Especially the Hotbed programmes. Perdie and Margaret Anne – as well as their partners like UK based Seed Legals – are so passionate about supporting early-stage start-ups to launch and receive funding – especially those founded by women. We expect to spend a lot of time in in the UK in 2023 and look forward to meeting fellow entrepreneurs and investors at the January showcase in London, ” she said.

Huggnote, which is free to use while in BETA can be accessed via the company’s website or from receiving a HUGG from someone else. Users can select from a number of themes including ‘Merry Christmas’ ‘Missing You this Christmas’ and ‘Mistletoe Kisses’ and ‘Happy New Year’.

And all while being a little kinder to the planet too! What could be merrier than that!

 Overrules Demo Day will take place at Techspace in Shoreditch on 14rh January. Apply for a limited ticket at: https://www.thehotbed.co/hotbed-events

Say it with Love this Christmas – with Huggnote