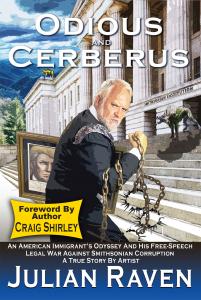 Odious and Cerberus: An American Immigrant’s Odyssey and his Free-Speech Legal War against Smithsonian Corruption by Julian Raven 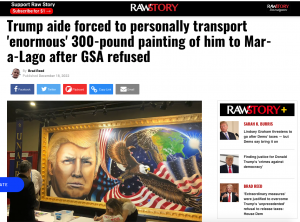 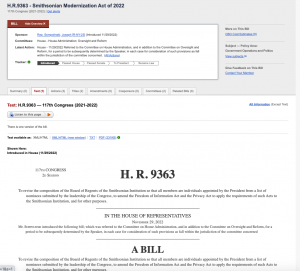 WASHINGTON, DISTRICT OF COLUMBIA, UNITED STATES, December 21, 2022 /EINPresswire.com/ — Congressman Joe Sempolinski, from New York’s 23rd congressional district, filed H.R. 9363, the Smithsonian Modernization Bill, in Congress in response to the author and artist Julian Raven’s new book, ‘Odious and Cerberus: An American Immigrant’s Odyssey and his Free Speech Legal War against Smithsonian Corruption.’ The exhaustive Smithsonian expose’, along with other factual documentation supplied by Raven to his congressional representative Joe Sempolinski, was sufficient to persuade and move the representative to write a bill calling for Smithsonian institutional reform, one of Raven’s chief objectives in his book.

The Smithsonian Modernization Bill H.R. 9363 focuses on some of the ongoing institutional, legal dilemmas that confuse the federal government, the federal courts, the Department of Justice, and the American People regarding the legal composition of the revered institution. Smithsonian entity status, the linchpin issue at the heart of Raven’s ongoing free-speech litigation against Director Kim Sajet and the Smithsonian National Portrait Gallery, undergirds the issues highlighted in Congressman Joe Sempolinski’s bill.

In Raven v. Sajet, the author’s current lawsuit against the Smithsonian Institution (Civil Action No. 22-2809 (CRC), the Department of Justice, represented by Assistant U.S. Attorney Sean M. Tepe, requested an extension of time to file their response to Raven’s free-speech claims, pushing it off until February of 2023. The U.S. Postal Service’s certified postage was insufficient, requiring a return receipt. The court was satisfied with Raven’s recently filed proof of service of process, eliminating any further cause of delay.

Julian Raven’s 2015 Trump presidential campaign portrait ‘Unafraid and Unashamed’ was the original subject of the artist’s free-speech litigation against Smithsonian National Portrait Director Kim Sajet and the Smithsonian Institution. The former pro-Trump artist who called on then-President Trump in January 2021 to resign for refusing the election results of then-candidate Joe Biden and for inspiring and instigating the insurrection of January the 6th, 2021, has had his portrait recently mixed into the GSA’s White House shipping scandal of a 300-pound trump portrait. Joining the ongoing attention to the prescient presidential portrait painted in 2015, Washington Post senior art critic Philip Kennicott on December 17th, 2022 roped Raven’s portrait into his trashing of the former president’s NFT art ‘grift.’ Kennicott echoed the erroneous popular opinion regarding portraiture accepted at the Smithsonian National Portrait Gallery, that it has something to do with artistic merit. The art critic listed everything he deemed ‘not’ qualifying as art in the article making art easier to understand for everyone.

Everything You Need To Know In One Place, Without Partisan Spin, And In Chronological Order