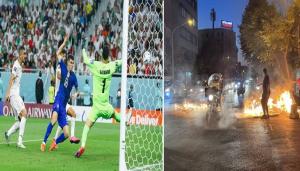 Iranian People celebration Iranian Regime’s Soccer Team Elimination from World Cup. An act of defiance to Regime’s ploy to unite everybody behind the “National” team and distract them from the goal of regime change apposing all forms of dictatorships. 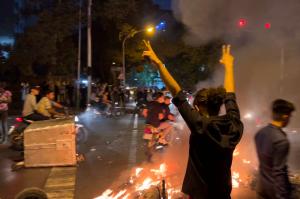 A Young Iranian Woman leading the Street Protests against the regime. Iranian regimes’ misogynist policies instigated the street protest entering its third month. Organized protests spring up in every neighborhood 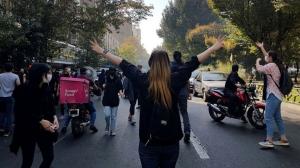 Iranian women have led street protests in every neighborhood. Regime’s security forces have proven ineffective in combating spread out protest that spans multiple neighborhoods across many large and small cities. After 11 weeks, protests are not showing sign of abating. 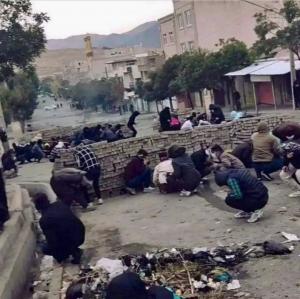 Kurdistan is leading Iranian provinces in fight against regime. The regime has introduced heavy armor and live ammunition, as well as combat arms. Kurdish people are raising barricades to hold their ground against regime forces. 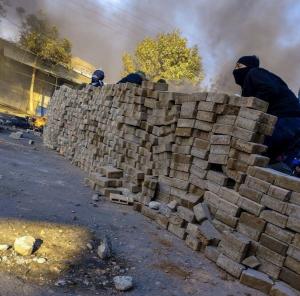 On many occasions regime has lost control of neighborhoods or entire small towns to kurdish people protest as part Iranian people’s democratic revolution against Mullah’s regime. The Kurdish protestor are holding their ground against the regimes

With Hijab, without Hijab, Onwards to Revolution”

In the fourth month of Iranian protests, the common theme of emphasis on regime change with central slogan of “Death to the Dictator”, “Death to Khamenei” continued. Iranians also completely rejected the past dictators through the chants of “Death to the Oppressor, Be it the Shah or the Leader (Khamenei)”.

On December 19, the 95th night of the uprising, young people and residents held nightly demonstrations and protests in various parts of Tehran. In Enghelab and Jamalzadeh streets, protesters chanted “Poverty, corruption, high prices, we will march to overthrow,” “We don’t want child-killer rulers,” “Political prisoners must be released” and “For every fallen person, one thousand will rise.” The young people clashed with agents who opened fire on them.

In Ekbatan neighborhood, protesters chanted “Answer is on the street, Seyyed Ali [Khamenei] is torn apart.” Cries of “Death to the dictator” and “Death to Khamenei” echoed in Chitgar township and Kashani street.

In Naft township, youths lit fires in the middle of the street and chanted “Death to the dictator,” “Answer is on the street, Seyyed Ali [Khamenei] is torn apart” and “With hijab or without, onwards to revolution.” In the Enghelab metro station, protesters chanted “Poverty is rampant, Seyed Ali is busy executing.” A large state banner was set on fire in Sattar Street.

In Rasht, angry demonstrators were chanting “Death to Khamenei.” Karaj witnessed nightly demonstrations. In a major street in Golshahr in Karaj, the youths came to the street chanting “Khamenei, the killer, we will knock you out” and shouted the name of Majidreza Rahnavard, who was hanged last week. In Mashhad, people chanted “Death to the dictator” during their nightly demonstration.

The regime agents can no longer dismiss what is happening nationwide and the prospects of regime downfall is now too obvious to ignore.

Notably, Revolutionary Guards Basij agent Pouyan Hosseinpour admitted that protesters no longer fear security forces. “This generation is no longer intimidated. It is resisting. We conflicted with several youths on the street for an hour,” he said on October 21. “We entered an alley with around 30 buildings; residents threw stones, vases, irons, furniture, and even barrels on us from all 30 rooftops.”

Iranian Balouchi population again came out to emphasize how they stand with the rest of Iran against the regime. People in various cities of Sistan & Baluchestan province took to the streets following the Friday Prayer and began chanting anti-regime slogans. Women have played a key role in leading the protests in this oppressed region.

Balouchi women wearing Hijab were shouting: “With Hijab, without Hijab, onwards to Revolution,” demonstrating discontent with the regime cuts through all social and cultural strata of the Iranian society.

In another sign of political astuteness, Balouchi people were shouting: “Kurds and Baluchis are brothers and despise [Khamenei].”

NCRI-US
National Council of Resistance of Iran – US Rep.Office
+ +1 202-747-7847
info@ncrius.org
Visit us on social media:
Facebook
Twitter
LinkedIn
Other

Students in Iran’s universities chant: Down with the Oppressor, Be it the Shah or the Supreme Leader

Pleasant’s Dina Shah focuses on self on golf course

Pleasant's Dina Shah focuses on self on golf course