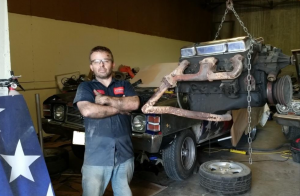 Scooter’s Garage is where you can bring your “unfixable” car and watch us bring it back with more horsepower, a new body, and the best performance possible.”

LANCASTER, TEXAS, UNITED STATES , December 19, 2022 /EINPresswire.com/ — Veteran Ted Fox opened his doors to the public with the launch of Scooter’s Garage. This Lancaster, Texas based garage specializes in restoring classic cars to their original glory and even performs high end modifications. Scooter’s Garage uses high end diagnostic equipment to plug in and assess a car’s performance.

Ted Fox always had an interest in cars. Relatives would show him the basics of auto maintenance and repair. This would develop into a lifelong passion that became a career. After serving in the Marine Corps, Ted returned to Texas and launched Scooter’s Garage. He enjoys the challenge of an “unfixable” car and restoring it back to life. Scooter’s Garage has had many customer success stories including a classic car that a woman had owned her entire life.

-The Ford Mustang first made its debut in 1964.

-The Chevrolet Corvette is built exclusively in Bowling Green, Kentucky.

-A total of 309 Dodge Chargers were used in the original “Dukes of Hazzard” television show.

-The first Chevrolet Camaro to come off the production line was black.

-A total of only seven Plymouth Hemi Barracuda convertibles were made.

-The Ford Model T was the first mass-produced automobile starting in 1913. It was also the first car that the “average” worker could afford.

To find out more about Scooter’s Garage, visit their Facebook Business Page at: https://www.facebook.com/ScootersGarage455

Rob Garcia
Shift Magazine
email us here
Visit us on social media:
Other

Friday the 13th brought Aliyyah Koloc a top 10 finish; Valtr and Šoltys helped each other out of trouble