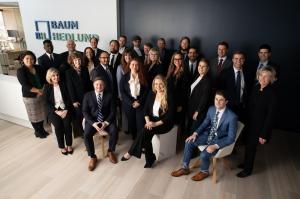 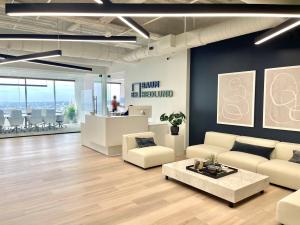 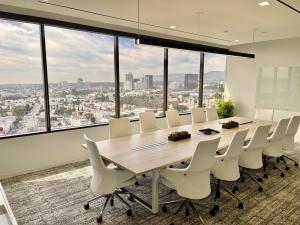 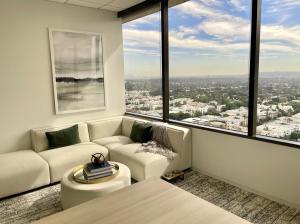 An office at Baum Hedlund 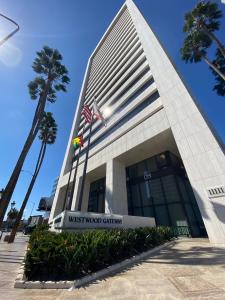 Baum Hedlund has moved its flagship office to a larger space at Westwood Gateway in Los Angeles, California.

As much as we have grown over the years and maintained a national scope, we will always be a Los Angeles law firm. Our new space exemplifies why this city is such a special place. ”

Baum Hedlund’s roots in Los Angeles go back nearly half a century. The firm first opened its doors in 1973 and has made the Westside of Los Angeles its main office location for decades, even as it expanded to include a Bay Area office and several satellite offices throughout California and in D.C.

“As much as we have grown over the years and maintained a national scope, we will always be a Los Angeles law firm,” says managing partner, Michael L. Baum. “Our new space exemplifies why this city is such a special place. You have the ocean, the mountains, and the skyscrapers downtown, all in plain sight. It is an inviting and inspiring atmosphere that we are fortunate to work in and share with our clients.”

“With all that we have accomplished bringing our firm to national prominence, we believe our best days are still ahead of us,” says Baum Hedlund vice president and senior shareholder, R. Brent Wisner. “Adding more space to our Los Angeles home office will support our firm’s continued growth as we look forward to 2023 and beyond.”

Baum Hedlund personal injury lawyers have several bellwether cases heading for trial in 2023. The upcoming cases involving Zantac, toxic baby food, and the Gardasil HPV vaccine represent the first in each litigation to go before juries.

The Zantac lawsuits are against defendants GlaxoSmithKline, Pfizer, Sanofi-Aventis U.S. LLC, Sanofi US Services Inc., and Boehringer Ingelheim. Plaintiffs allege the drug manufacturers failed to warn that Zantac (generic: ranitidine) can degrade into a cancer-causing substance called N-Nitrosodimethylamine (NDMA) when taken as directed.

3) Baum Hedlund also co-leads the Gardasil multidistrict litigation (MDL) for plaintiffs who allege the HPV vaccine caused them severe auto-immune injuries. This summer, the U.S. Judicial Panel on Multidistrict Litigation (JPML) issued an order consolidating dozens of Gardasil human papillomavirus (HPV) vaccine injury cases before a federal judge in North Carolina. The order allowed Gardasil lawsuits filed throughout the U.S. to move into coordinated discovery and pretrial proceedings. In October of 2022, the judge overseeing the Gardasil MDL appointed Baum Hedlund senior shareholder Bijan Esfandiari to serve as co-lead counsel for plaintiffs. Esfandiari believes the first case in the Gardasil MDL will go to trial at some point in 2023. The Gardasil MDL is captioned In Re: Gardasil Products Liability Litigation MDL No. 3036.

4) Lastly, Baum Hedlund and Shawn Brown Law, filed the first federal lawsuit (Case No. 2:22-cv-00048) against gun manufacturers, the school district, law enforcement, and other defendants for their roles in the Robb Elementary school shooting in Uvalde, Texas. Baum Hedlund attorney Stephanie Sherman is leading this case on behalf of several Uvalde families. While a trial date has not yet been set, this case has generated significant attention to important safety issues affecting Uvalde and the rest of the country.

Baum Hedlund provides award-winning advocacy and support to clients in Los Angeles and throughout the nation. In practice since 1973, Baum Hedlund has grown to include six offices throughout California, as well as one in Washington, D.C. The firm has an established nationwide presence with more than $4 billion in verdicts and settlements won for clients.

Clients, peers, and legal organizations have honored Baum Hedlund and its personal injury attorneys with numerous awards and accolades, including:

• The Bar Register of Preeminent Lawyers™

Many of the leading legal publications have recognized Baum Hedlund for notable verdicts and settlements:

Additional photos of the new Baum Hedlund office can be viewed here.

The year of the business-driven CISO

Everything You Need To Know In One Place, Without Partisan Spin, And In Chronological Order

The year of the business-driven CISO