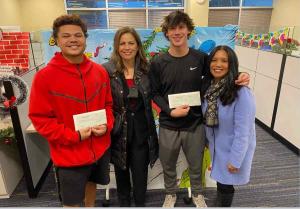 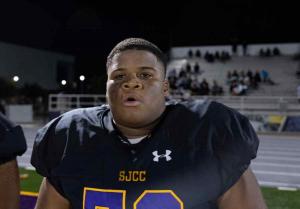 Jeremyah Rollins is a freshman offensive lineman with the SJCC Jaguars, who will be visiting family in Anchorage, Alaska thanks to Alaska Airlines.

The SJCC Campus is located in San José, CA.

We are grateful to Alaska Airlines for supporting our students and making it possible for them to have an amazing holiday break.”

SAN JOSE, CALIFORNIA, UNITED STATES, December 20, 2022 /EINPresswire.com/ — Alaska Airlines surprised three San José City College students experiencing housing insecurity with the “Gift of Travel” flights to visit their families for the holidays. The airline also gave the students $500 in spending money and $1,000 to put toward their next month’s rent.

Alaska Airlines identified the students through its longstanding partnership with the San Jose – Evergreen Community College District Foundation. The students, two from Alaska and one from Massachusetts, are members of the SJCC Jaguars football team.

“Our student-athletes are hardworking and dedicated, and we appreciate all they do in the classroom and on the field,” said Dr. Rowena M. Tomaneng, SJCC president. “We are grateful to Alaska Airlines for supporting our students and making it possible for them to have an amazing holiday break.”

“Not only do we work and live in California and want to be part of the solution of helping the most vulnerable members in our community, but care is at the core of our DNA here at Alaska Airlines,” said Neil Thwaites, regional vice president of California for Alaska Airlines.

“Hearing the exciting news that Alaska Airlines would be supporting three of our students, faced with housing and financial challenges by flying them home to be with their families for the holidays, was an emotional moment,” said Rosalie Gutiérrez Ledesma, executive director of government and external affairs for the SJECCD Foundation. “Little did we know Alaska Airlines also had a surprise for our foundation that allows us to continue supporting our most vulnerable college students.”

A 2019 #RealCollege survey shows that nearly 70 percent of SJCC students were housing insecure in the prior year, while 25 percent were homeless.

“Our students face a high level of housing insecurity which creates an additional struggle on top of other basic needs while they attend college,” said Ledesma. “Alaska Airlines’ generous gift will have a significant impact.”

Jaideven Tabios-Suesue is an SJCC first-year student-athlete. His grandparents in Anchorage, Alaska, adopted him and his 14 siblings after his father was incarcerated and his mother left for another state. Jaideven is the first in his family to pursue college and earn straight A’s as a business major. He hopes to transfer to San José State University to be a Spartan on and off the field.

Jeremyah Rollins is an SJCC freshman and offensive lineman for the Jaguars football team. The first person he wants to see when he returns home to Anchorage is his mother, who raised him alone. Jeremyah said his mother is his “everything” and why he “plays football and is in college.” When the family of one of Jeremyah’s teammates learned he couldn’t afford a place to live in the Bay Area, they opened their doors and welcomed him into their home. He hopes to find a job soon and afford his own place.

Mike Holt is a freshman at San José City College and a wide receiver on the Jaguar squad. He moved from Massachusetts and immediately found himself struggling to stay housed. “Moving across the country makes me miss my family, and if I can see them, that’s all I want for the holidays,” he said. He currently has several roommates and shares his room to afford rent.