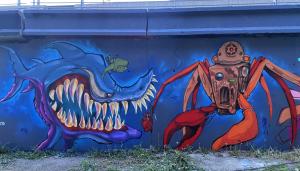 Osmo’s mural for The Outlaw Ocean Mural Project can be found in Paris, France and is called “Sharks and Crabs of Josué de Castro.”

The project’s mixture of the journalistic and artistic universes is brilliant.”

WASHINGTON, DC, UNITED STATES, December 19, 2022 /EINPresswire.com/ — In a detailed testimonial about his art, muralist Shell Osmo explains why he joined forces with investigative reporter Ian Urbina to draw attention to human rights and environmental abuses at sea within The Outlaw Ocean Mural Project.

A global effort to disseminate investigative journalism about human exploitation and labor crimes at sea, the project brings together muralists from around the world to leverage public creativity with a cause. The art they create is based on the groundbreaking reporting produced by a small, non-profit news outlet based in Washington, D.C., The Outlaw Ocean Project. The organization exposes the urgent problems happening on the earth’s oceans including sea slavery, arms trafficking, the climate crisis and overfishing.

What makes The Outlaw Ocean Project a distinct news organization is three-fold. First, the reporting focuses on the more than 50 million people who work in a realm that covers over two thirds of the planet, but whose stories are rarely told. Second, the news-gathering is funded directly by readers and foundations so that the stories can be published for free in over a half dozen languages and more than three dozen countries, which gives it wide impact. Third, the journalism is targeted toward non-news platforms and a younger and more international audience by converting these stories into art. In turn, individuals are able to connect with the issues on a more visceral level.

The Outlaw Ocean Mural Project is part of this innovation and offers a communal display of nontraditional journalism with unmatched effectiveness.

Shell Osmo is from Recife, Brazil. He is a street artist, cultural producer and illustrator. Osmo is an artist who often illustrates riverside life. He portrays the flora and fauna of his community in his work, while also illustrating the lives of the people in the area.

When joining The Outlaw Ocean Mural Project, Osmo was most impacted by the issues of sea slavery and the illegal capture of depleted fish raised in the book.

The artist believes his work can affect real change, especially when it comes to his artistic contribution to the amplification of Urbina’s journalism.

Reflecting on the wide reach of the project, Osmo mused,“The Outlaw Ocean Project reinforced my sense of hope, knowing that it would stimulate an important discussion on ocean issues.”

Osmo’s mural can be found in Paris, France and is called “Sharks and Crabs of Josué de Castro.”

The Plastics Specialist Brings Sales and Engineering to Virtual Reality