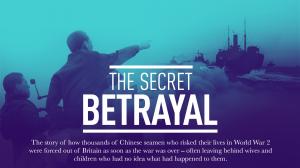 Poster of “The Secret Betrayal” 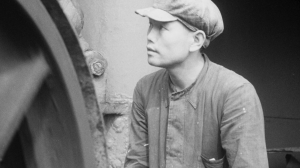 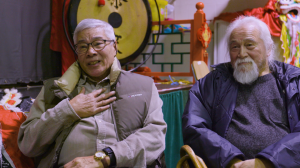 The Secret Betrayal: how the UK ejected the Chinese sailors who had risked their lives

LONDON, UK, December 16, 2022 /EINPresswire.com/ — The Secret Betrayal: how the UK ejected the Chinese sailors who had risked their lives

Fathers torn from families, wives left destitute, children forced into care and orphanages: A new CGTN Europe documentary reveals the terrible emotional and psychological toll of a secret British government policy which betrayed men who had willingly risked their lives to secure the allied victory in World War II. In ‘The Secret Betrayal,’ presenter Jamie Owen hears the traumatic testimony of sons, daughters, and grandchildren of Chinese sailors forcibly repatriated from Liverpool between 1945 and 1948.

Produced in-house by CGTN Europe’s head of features Neil Cairns together with Simon Morris, the documentary tells the story of the heroic sailors who braved the North Atlantic and Arctic Oceans to keep Allied forces supplied during the war, defying U-boats and freezing weather.

The story is enshrined in Britain’s national identity, but less well known is that more than one in seven of the men risking their lives in those supply convoys were Chinese, recruited by the British government who at the time praised their contribution and said that they were ‘making history under fire’. Many of them started families with British women in the port city of Liverpool. But once the war ended and British forces returned home triumphant, the Chinese sailors who were such a vital part of their victory were betrayed.

At a secret meeting in October 1945 civil servants and police classed them as ‘undesirables’ and dismissed their British-born wives as members ‘of the prostitute class.’ It forcibly repatriated thousands of sailors, often rounding them up from their homes, lodging houses, mahjong parlours, chip shops and bars, and forcing them on ships.

Hundreds of men vanished overnight, leaving behind wives, partners, and children without any explanation of where they had gone and why.

Owen speaks to sons, daughters, and grandchildren of the sailors, whose families were torn apart and often left penniless after the Chinese seafarers disappeared. He examines the original documents setting out the racist justifications used by UK Home Office decision-makers and talks to historians about how the scandal could have happened and gone unacknowledged for more than 70 years.

The Secret Betrayal is a story of a callous political calculation made in London that ravaged an entire community in Liverpool to such an extent that the pain is still being felt three generations on.

The documentary will be broadcast globally in English but will have Chinese subtitles in China. The documentary is also available in Spanish, French, Arabic, and Russian. Additional material will be available online and in a series of podcasts.

Families of the repatriated sailors hope that people seeing the documentary, especially in China, may know something about what happened to their missing men. The documentary and all digital assets will carry this message:

Do you know more about this story? Email: sailors@cgtn.com

The Secret Betrayal airs on CGTN

China Global Television Network is the international news channel of China Media Group. It broadcasts 24/7 in 180 countries from production centers in London, Nairobi and Washington DC as well as its Beijing headquarters.