The Hawkeyes will travel to Nashville, Tennessee, to take on the Wildcats at 11 a.m. on Dec. 31 at Nissan Stadium. 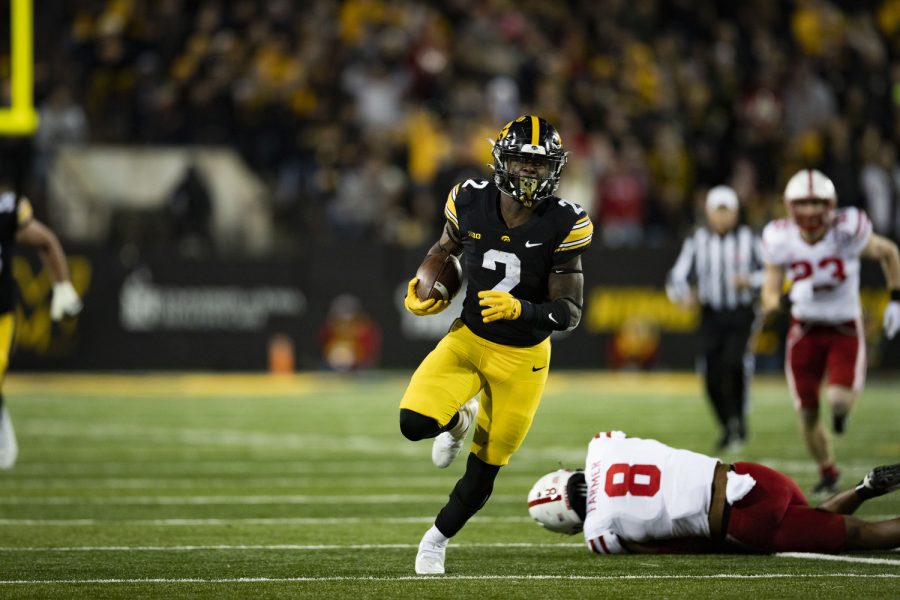 Iowa running back Kaleb Johnson runs for a touchdown during a football game between Iowa and the Nebraska at Kinnick Stadium on November 25, 2022. Johnson had 109 rushing yards and one touchdown. The Cornhuskers defeated the Hawkeyes, 24-17.

The Iowa football team will head to Nashville for New Years Eve.

The 7-5 Hawkeyes will take on the 7-5 Kentucky Wildcats in the Music City Bowl at Nissan Stadium in Nashville, Tennessee on Dec. 31. Iowa and Kentucky will meet for the second consecutive bowl game.

The two teams’ second-ever meeting will have less firepower. Iowa will be without starting quarterback Spencer Petras and backup Alex Padilla, and head coach Kirk Ferentz said the Hawkeyes will start third-string Joe Labas or fourth-string true freshman Carson May. Petras suffered a season-ending injury on Nov. 25, and Padilla entered the transfer portal.

The Wildcats’ offense will also be depleted on Dec. 31.

Starting quarterback Will Levis opted out of the bowl game to prepare for the 2023 NFL Draft, in which he is a projected first-round pick. Levis completed 17 of 28 passes for 233 yards and a touchdown against the Hawkeyes in the Citrus Bowl.

Running back Chris Rodriguez, who had 112 rushing yards and two touchdowns against the Hawkeyes last season, also elected to declare for the 2023 NFL Draft.

Quarterback Kaiya Sheron is expected to start for the Wildcats in the Music City Bowl. Sheron has appeared in two games this season, starting one against South Carolina. Overall, he has completed 17 of his 29 passes in 2022 for 187 yards, two touchdowns, and one interception.

Below is the Music City Bowl game information. Check out stories from The Daily Iowan’s pregame staff at https://dailyiowan.com/pregame/ and on stands now.

Stories from this week’s Pregame: