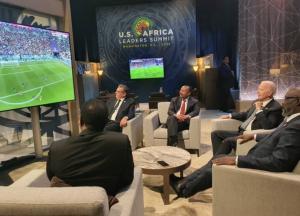 One of many pictures and videos showing President Biden relaxing with Ethiopia’s Prime Minister Abiy during the U.S. Africa Leaders Summit in Washington, D.C.

Shock grows as President Biden is seen with Prime Minister Abiy while failing to hold the Ethiopian leader accountable for atrocities committed in Tigray.

WASHINGTON, DISTRICT OF COLUMBIA, UNITED STATES , December 15, 2022 /EINPresswire.com/ — Human rights organizations and members of Congress have expressed shock and concern as the Ethiopian government circulates pictures and videos of President Biden watching television and being jovial with Ethiopian Prime Minister Abiy. Military troops and militias loyal to Prime Minister Abiy have been accused of war crimes, genocides, and using rape and starvation as weapons of war against the people of Tigray. The United Nations reported that over 26,000 Tigray women and girls were raped by troops loyal to Prime Minister Abiy. President Biden’s response to the Tigray crisis contrasts with the President’s response to the war in Ukraine. This has resulted in many pointing to the belief that as it pertains to U.S. foreign policy, there is one rule for Africa and a different rule for Europe.

Members of Congress are frustrated with President Biden’s refusal to hold Prime Minister Abiy and members of his government accountable for the atrocities committed in Tigray. The Ranking Member of the Senate Foreign Relations Committee, Senator Jim Risch, stated, “The Biden Administration has yet to make an atrocities determination or hold Ethiopian leaders accountable for the human rights abuses committed. This inaction has contributed to continued atrocities. In the year ahead, the United States must be clear-eyed and undeterred in its resolve to help end the fighting for good and restore unfettered humanitarian access to all those in need. The Biden Administration must also begin filling its glaring deficit on issues of Ethiopian accountability with meaningful action.”

Von Batten-Montague-York, L.C. will continue to advise members of Congress and the Biden Administration of the need to hold Prime Minister Abiy and his government accountable for the atrocities committed in Tigray