Mubadala tennis kicks off with top stars in action – News

Ons Jabeur, the two-time 2022 Grand Slam finalist and world No.2, will look to defend her MWTC title against 2021 US Open Champion and British No.1 Emma Raducanu 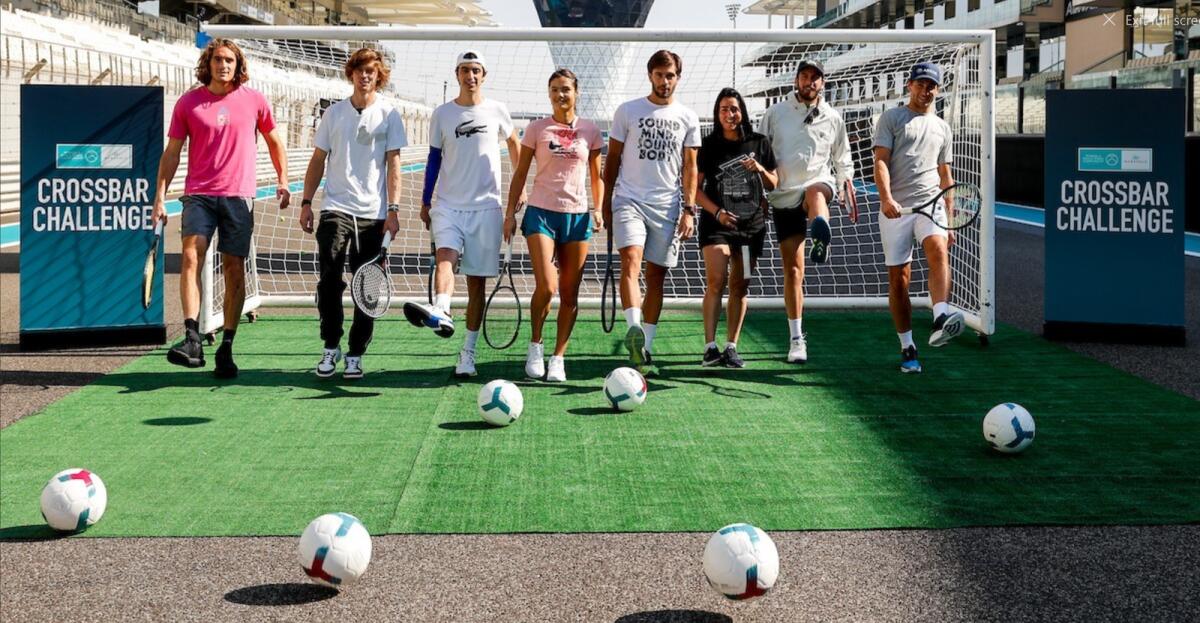 Players during the crossbar challenge at the Yas Marina Circuit. — Supplied photo

The 14th edition of the highly anticipated Mubadala World Tennis Championship (MWTC) gets underway on Friday with the likes of defending champion Andrey Rublev, Stefanos Tsitsipas, Ons Jabeur among others in action at the International Tennis Centre, Zayed Sports City, in Abu Dhabi.

In the opening match (4 pm), fan favourite Tsitsipas will take on Britain’s No.1 male tennis player Cameron Norrie. Tsitsipas, the 2021 French Open finalist, was a hit with fans during his first appearance in Abu Dhabi back in 2019. He became the highest-ranked Greek player in history when he climbed to World No.3 on the ATP rankings in August 2021, in a year where he reached his first Grand Slam final at the French Open. He has reached the semifinals of the Australian Open three times in 2019, 2021 and earlier this year.

Norrie will be making his tournament debut. The 27-year-old has held the top spot in men’s singles in Great Britain since October 2021 and reached a career high No. 8 ranking this past summer, joining Greg Rusedski, Tim Henman, and Andy Murray as the only British males in history to break into the world’s top 10.

In the second match (6 pm), Rublev, the reigning champion, will play Croatian Borna Coric, who is also making his maiden entry into MWTC after American Frances Tiafoe was forced to withdraw through injury.

Rublev, the 24-year-old, who has reached a career-high ranking of World No.5, secured his first MWTC title with a straight-sets victory over Andy Murray last December. Rublev has 11 ATP Tour singles titles and three doubles titles to his credit so far. He won the mixed doubles gold medal at the 2020 Tokyo Olympics alongside compatriot Anastasia Pavlyuchenkova and has reached the quarterfinals of a Grand Slam five times, including at this year’s French and US Opens.

Coric, the 26-year-old, who beat fellow MWTC contenders Norrie and Tsitsipas en route to winning the Cincinnati Masters in August, will be hoping to stun Rublev too.

“I’m excited to be making my Mubadala World Tennis Championship debut in Abu Dhabi. I know there are a lot of Croatian sports fans in the region so it will be great to play in front of them. Playing in the Championship, with such a strong line-up, is the perfect start to my 2023 season,” said Coric.

Finally, in the women’s match (8pm) Ons Jabeur, the two-time 2022 Grand Slam finalist and World No.2, will look to defend her MWTC title against 2021 US Open Champion and British No.1 Emma Raducanu.

Day two of the tournament will see World No. 1 Carlos Alcaraz and No. 3 Casper Ruud playing the winners of Friday’s matches.

Ahead of the tournament, the players took part in a crossbar challenge. With their football goal post target 20 metres away, the seven players were each given five chances to hit the crossbar with a tennis ball using only their racquets. They were then challenged to switch sports by trying to strike a football against the crossbar. After a few near-misses, surprise strikes, and debatable decisions, Borna Coric emerged victorious after hitting the crossbar twice with a tennis ball and Stefanos Tsitispas was the only player who hit the target with a football.