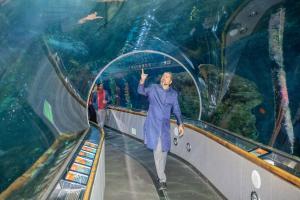 In a candid conversation with the Aquarium and Bay Ecotarium President & CEO George Jacob, Ricky lauded the transformative vision for creating an interconnected web of Oceanariums and Climate Literacy centers around the world. As the Bay Ecotarium celebrates 42 years of environmental advocacy and ocean conservation through its seven branches including the Aquarium of the Bay with 24,000 live animals from the San Francisco Bay, it looks forward to creating an immersive, interactive, evocative exhibit experience that builds awareness to contributing factors towards global warming, sea-level rise, depletion of natural resources and habitat destruction endangering species both on land and seas. The living museum with an aquarium at its core, will explore generational solutions and explain the cascading and cumulative consequences of inaction.

During the pandemic, Ricky Kej and six other Grammy winners came together with Stewart Copeland to write the Bay Ecotarium Song that was shared with the audience. With Live performances in over 30 countries including at the United Nations headquarters in New York and Geneva, Kej was named a UNCCD Land Ambassador at the COP14 to raise public awareness about the challenges of land degradation, desertification and drought, and serves as a UNESCO – MGIEP “Global Ambassador for Kindness”, UNICEF Celebrity Supporter, and is an ambassador for the Earth Day Network. His album Shanti Samsara – World Music for Environmental Consciousness was launched on 30 November 2015 at the 2015 United Nations Climate Change Conference by Indian Prime Minister Narendra Modi and then French president, Francois Hollande. Kej has traveled widely speaking about conservation and the environment, including a visit to the Republic of Kiribati, where he interviewed and created music with three-term ex-president, Anote Tong. President Tong was the Guest of Honor at the Bay Ecotarium’s Climate Conversations atop Salesforce Tower in San Francisco.