Sight, Sound & Story Live Presents Behind the Sound of “Everything Everywhere All at Once” on December 19th 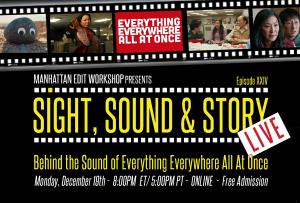 The critically acclaimed sound team of “Everything Everywhere All at Once” showcase and discuss their work on the Darkhorse hit of 2022.

Inside Episode XXIV: Sound is one of the most important elements in film and is used to evoke emotions, indicate mood, and elevate a performance. Join the multi-award-winning sound team behind A24’s critically acclaimed, award-winning feature “Everything Everywhere All at Once,” as they discuss sound design, establishing rhythm, foley techniques, and much, much more. The sound team includes Emmy-winning Sound Designer Brent Kiser, award-winning Sound Designer Andrew Twite, award-winning Re-Recording Mixer, Sound Designer, and Supervising Sound Editor Alexandra Fehrman, and Los Angeles-based Sound Designer Julie Diaz. The conversation will be guided by moderator Woody Woodhall, CAS (Studio Principal of Allied Post Audio), as they discuss mixing the film’s numerous sound fxs and music: as well as how they created the multiverse and dimension jumping sounds. Throughout the discussion we will see and hear examples of the team’s extraordinary work on one of the best films of the season.

This event wouldn’t be possible without our Master Storyteller Sponsors: OWC, AJA Video Systems, American Cinema Editors, & EditFest Global; as well as our Technology Sponsors: ZEISS, and Filmmaker U. We are also grateful for the continued support of our partners ProductionHUB, Digital Cinema Society, Mallorca Film Festival, LAPPG, NYWIFT, Film Fatales, and The D-Word.

To register, please go to: https://bit.ly/3FxSsP0

About Our Panelists:
Julie Diaz is a Los Angeles-based sound designer with a wide breadth of experience crafting sound for film and television. She most recently served as the ADR supervisor on A24’s critically acclaimed drama “Everything Everywhere All at Once” starring Michelle Yeoh, Jamie Lee Curtis and Ke Huy Quan from directors Dan Kwan and Daniel Scheinert. She also recently supervised ADR for Netflix’s “Murderville” series and crime drama “No Man of God,” starring Elijah Wood, and the comedy film “Together Together” which premiered at Sundance in 2021. She was also the supervising sound editor of the Indie Spirit Award-winning feature “7 Days” and sound edited Netflix’s “Untold” docuseries and Hulu’s true crime series “The Curse of Von Dutch.”

Alexandra Fehrman is an award-winning re-recording mixer, sound designer, and supervising sound editor with more than 15 years of sound department experience in film and television. She recently received her first Emmy nomination for Outstanding Sound Mixing for A Comedy or Drama Series (One Hour) for her work on Amazon’s “The Boys.”

She was also the final re-recording mixer of Sian Heder’s Sundance hit “CODA” which sold to Apple TV+ in a record-setting $25 million sale, and went on to win the Oscar for Best Picture.

Alexandra was also the sound effects editor and re-recording mixer for A24’s critically acclaimed feature, “Everything Everywhere All At Once” from directors Daniel Kwan and Daniel Scheinert.

Brent Kiser is an Emmy-winning sound designer and the founder of post sound company Unbridled Sound based in Los Angeles. His 15-year career in sound spans feature films, TV series and documentaries. Brent most recently served as the sound supervisor and re-recording mixer on A24’s critically acclaimed drama “Everything Everywhere All at Once”. Brent first worked with The Daniels on their Gotham Award and Indie Spirit Award-nominated film “Swiss Army Man.”

Brent has supervised and mixed the sound for numerous award-winning films and television series including Alma Ha’rel’s breakout feature “Honey Boy” which won the Sundance Special Jury Prize among several other notable awards; Netflix’s “Muderville” and “Untold docuseries”; and the 2021 Sundance comedy film “Together Together.”

Brent’s work on the History Channel’s “Gettysburg”, earned him the primetime Emmy Award for Outstanding Sound Editing for Nonfiction Programming, and the MPSE Golden Reel Award for Best Sound Editing – Long Form Documentary. He later received his second Emmy nomination as the sound supervisor and re-recording mixer of Netflix’s “Wild Wild Country,” which won the Emmy for Outstanding Documentary or Nonfiction Series.

Andrew Twite is an award-winning sound designer based in Los Angeles with over 15 years of industry experience spanning feature films to documentaries and adult animated comedy. In 2008, Andrew won the MPSE Golden Reel Award as the dialogue editor of “Return to House on Haunted Hill” for Best Sound Editing for Direct to Video. He earned an additional three MPSE Golden Reel Award nominations for sound editing “Star Trek: Discovery,” “Rick and Morty,” and “BoJack Horseman.”

Andrew most recently sound designed A24’s critically acclaimed drama “Everything Everywhere All at Once.” Andrew first worked with the Daniels on their Gotham Award and Indie Spirit Award-nominated film”Swiss Army Man.”

Woody Woodhall, CAS, is the owner of Allied Post Audio in Santa Monica, CA and is an award-winning supervising sound editor, sound designer and re-recording mixer. His work spans feature films, documentaries, podcasts, commercials, and television programming including hundreds of hours for outlets such as Netflix, Amazon Studios, YouTube Red, CBS, Comedy Central, and Food Network. He has recently completed mixing the 1st season of the series “Prisoner of the Prophet” for Discovery+, a feature documentary for CNN Films about 5 brave female photojournalists called “No Ordinary Life”, as well as the recently released feature film starring Mena Suvari called, “The Greatest Inheritance.” Woody is author of the college textbook, Audio Production and Postproduction, used at universities across the world. He also heads the Los Angeles Post Production Group (LAPPG) where he shares his filmmaking expertise alongside other working professionals on a monthly basis.