DreamSpring Crosses New Impact Threshold with More Than Half of U.S. in Its Service Area 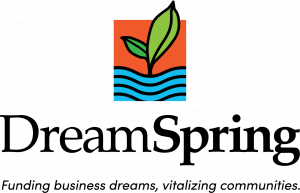 DreamSpring is serving entrepreneurs with credit, loans, and support in 27 states – over half of the U.S. — for the first time in the nonprofit Community Development Financial Institution’s 28-year history.

DreamSpring is putting funds into the hands of more underserved entrepreneurs than ever. When these small business owners realize their dreams, they vitalize communities for generations.”

For the first time in its 28-year history, DreamSpring is serving entrepreneurs with credit, loans, and support in over half of the United States. This geographic milestone caps off a landmark year that includes being named one of Fast Company’s World’s Most Innovative Companies.

DreamSpring pairs a proprietary lending platform with hands-on support, in Spanish and English, to offer small business loans from $200 to $2 million; average loan size is $13,500.

“Our service area represents communities that face daunting barriers to affordable capital — and transformational promise for the future,” says Edmond Johnson, DreamSpring Board Chair. “DreamSpring is putting funds into the hands of more underserved entrepreneurs than ever. When these small business owners realize their dreams, they vitalize communities for generations.”

This growth aligns with DreamSpring’s mission-driven strategy to scale its impact tenfold and serve entrepreneurs in 50 states by 2024.

“Even as we celebrate this milestone that will positively impact so many lives, we are pressing ahead toward our ambitious plan for 10x growth,” says Anne Haines, DreamSpring President/CEO. “If we persevere with courage and hope, there’s no limit to what we can achieve together.”

DreamSpring is a nonprofit community lender dedicated to eliminating systemic wealth inequities and accelerating the economic inclusion and strength of underserved communities. Founded in 1994, DreamSpring provides rapid access to capital and wrap-around support to vulnerable small business owners in 27 states, focusing on people of color, women, low- to moderate-income earners, people with disabilities, and start-ups. To date, DreamSpring has issued over 45,000 loans totaling over $504 million to small businesses that support an estimated 79,000 jobs. Learn more at DreamSpring.org.