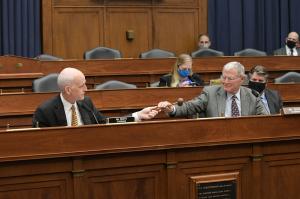 Despite Somaliland’s long history of corruption, human rights violations, and persecution of Christians, the now blocked S.3861 was introduced in Congress.

Members of Congress must not view themselves as having the power to determine the borders of black-African countries or recognize secessionist regimes in Africa. Such actions will destabilize Africa.”

WASHINGTON, DISTRICT OF COLUMBIA, UNITED STATES, December 9, 2022 /EINPresswire.com/ — On behalf of the United Somali Alliance, Von Batten-Montague-York, L.C. is pleased to announce that both the U.S. House and Senate National Defense Authorization Act for Fiscal Year 2023 (NDAA) Somaliland Partnership Act amendments were successfully blocked from inclusion into the NDAA for Fiscal Year 2023.

The S.3861-Somaliland Partnership Act was a bill that many Somalis, including the government of the Federal Republic of Somalia, considered an insult to the Somali people. This is because the Somaliland government is a secessionist regime illegally seeking to break away from Somalia. S.3861 aimed to establish a partnership between the United States (U.S.) Department of Defense and the secessionist government of Somaliland. The original version of S.3861 even included the establishment of a quasi-U.S. embassy in the capital of Somaliland, to be known as the ‘‘American Institute of Somaliland.’’ This provision and many provisions considered an attack on the sovereignty of the Federal Republic of Somalia were removed when Von Batten-Montague-York, L.C. successfully lobbied for the modification of S.3861 in June 2022.

Despite the Somaliland government’s long history of corruption, human rights violations, and persecution of Christians, S.3861 and H.R.7170. – Republic of Somaliland Independence Act were introduced in Congress after the Somaliland government began lobbying a few members of congress and offered, in exchange for the U.S. recognition of Somaliland, U.S. access to a strategically located Port and land for new U.S. military bases in Somaliland. Von Batten-Montague-York, L.C. also lobbied against H.R.7170. – Republic of Somaliland Independence Act and is confident that this bill will not be allowed to become law.

Members of Congress must not view themselves as having the power to determine the borders of black-African countries or recognize secessionist regimes in Africa. Such actions will establish bad precedents that will result in the stabilization of the African continent.

Source material weblinks are noted below.