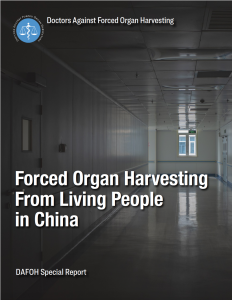 If the alleged crime is too bold and brazen to be believed, the unscientific response of disbelief prevents us from following our natural curiosity…from inspecting the issue with a scientific mind.”

Forced organ harvesting, the state-sponsored killing of prisoners for their organs, is a crime against humanity and in the case of the buddhist Falun Gong, a silent genocide. Per definition and consensus, these crimes cannot be categorized as internal affairs of a country, regardless of claims of sovereignty. Crimes against humanity do harm to our global community and impose a threat to all of humanity.

Positioned to raise awareness and challenge western medical organizations, governments and the public to take action, the 56 page, peer reviewed report provides comprehensive information, tracing the picture of a rogue practice of genocidal proportions from its origins to the rapid growth of China’s lucrative transplant business today.

The data presented in the new report reveals critical details and confirms over 25 years of established evidence. Analysis of the data explores China’s social structure, its profitable transplant business, organ supply, donation numbers and unprecedented short wait times. Eye witness testimonies give a human face to the CCP’s relentless violence against the victims.

The report comes after credible investigations of hard evidence by international experts. The China Tribunal, chaired by Sir Geoffrey Nice, recently reviewed “a critical mass of facts” in 2019, and concluded: “Forced organ harvesting from living people has occurred in China, with the religious Falun Gong being a main target.”

DAFOH founder and executive director, Dr. Torsten Trey, clarifies that the true nature of the problem lies not in economics or politics, but in the CCP’s agenda to annihilate Falun Gong. In memory of the gas chambers in Nazi concentration camps, he states, “If the alleged crime is too bold and brazen to be believed, the unscientific response of disbelief prevents us from following our natural curiosity and from inspecting the issue with a scientific mind.”

The report comes at a time when waves of protests in China have reached historical proportions amid excessive COVID lockdowns and the death of a former dictator and CCP leader.

The report states that the failure of the international community to respond to China’s transplantation crimes has enabled China to carry out similar crimes against the Uyghurs and others, and to commit horrendous medical malfeasance that has caused millions of deaths from COVID-19 and severely damage economies around the world.

The report highlights the efforts of legislators who have helped raise awareness, but have not been successful in helping to stop the practice. DAFOH calls on the public to take action without delay to help save lives by breaking the silence and telling elected officials, friends and colleagues about the victims of forced organ harvesting.

How many people go missing in England and Wales each year?

“Florida is a laboratory for fascism” under Ron DeSantis