Scholars Of Sustenance Have Reached A New Milestone 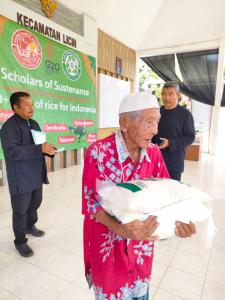 An old man after receiving the rice donation. 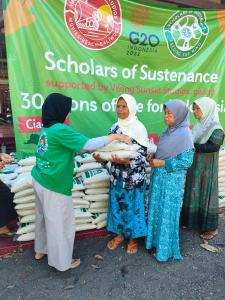 Locals lining up to receive the rice donation.

DENPASAR, BALI, INDONESIA, December 11, 2022 /EINPresswire.com/ — The G20 event back in November was a huge success. Top country leaders from around the world came to Bali and discussed how to improve the world under the headline Recover Together, Recover Stronger.

Sustainable Energy Transition was one of the topics, and food security was a headline which aligns with the goals of Scholars Of Sustenance, the largest food rescue foundation in South East Asia.

Every day, SOS, with their cool-chain technology, rescues tons of food from their partners such as hotels, retailers, and supermarkets to prevent good food from being thrown into landfills, emitting methane gases. During COVID, SOS has served over 3 million nutritious meals to communities in need around Bali and, globally served more than 25 million meals since its inception. Besides saving the environment, it also has a big impact on creating sustainable Circular Economies.

To participate in and uphold the G20 sustainable theme for a better world, SOS is running a G20 surplus food race Campaign. Viking Sunset Studios, a Hollywood-like production house in Bali, is the main supporter of this campaign. They donated IDR 300 million to SOS. The donation is being converted to 30 tons of rice and is now being distributed to several areas in Bali, such as Tabanan, Jembrana, Karangasem, and Nusa Penida. SOS staff also moves fast to help residents in areas hit by floods in Banyuwangi, earthquakes in Cianjur, and volcanic eruptions in Semeru.

“SOS has obtained surplus foods from manufacturers, supermarkets, and hotels for years, but since Bali has recovered slower than anticipated, SOS gets far fewer foods now than at our pre-COVID levels. So, while SOS is waiting for their generous food donors to come back, we need to help donate money to get this nutritious food to those most in need,” said Bo H. Holmgreen, President and CEO of Viking Sunset Studios. Mr. Holmgreen was a speaker at the recently held G20 conference on Food Security. “The world has a food distribution problem. Every day we produce 10+ billion people’s worth of food. We are 8 billion inhabitants, yet one billion of us go to bed hungry every night. SOS was created in 2016 to attack this problem by optimizing society better, rescuing good food and safely getting it same day to hungry people.”

“Recently, we received this donation of 300 million rupiahs from the Viking Sunset Studios, a film production studio with world-class equipment in Sanur and Tabanan, Bali. We converted the donation into more than 30 tons of rice, which is going to be distributed to Bali and Java, especially the earthquake zone of Cianjur, Banyuwangi, and to Tabanan, Jembrana, Karangasem, and Nusa Penida.” Said Ibu Ratna Soebrata, the General Manager of Scholars Of Sustenance Indonesia, to the community in Mendoyo village.

The next G20 distribution destination is Java, specifically areas affected by natural disasters. The first one is Cianjur, West Java. Scholars Of Sustenance sent a team to the location, distributing 10 tons of rice to the affected people. “Due to the demolished broken homes and buildings, the incessant rain making areas impassable, there is no electricity in the Cugenang area. A total blackout. This was the condition and situation in Cianjur after hard being hit by a large earthquake with frequent aftershocks, The people are in dire need of help, mainly food assistance,” Tara from SOS Indonesia stated when she had to rush over to help in the catastrophe area.

SOS also distributed 10 tons of rice to people affected by the floods in Banyuwangi, East Java. Another SOS team was sent to Banyuwangi in a Viking Sunset Studio truck; Eka, and Faisal. Both are natives of Java and are very grateful that SOS could help there with faster action.

“It is my island, and it feels great to go back and be a part of helping the people affected by the volcanic ash by donating 10 tons of rice,” Eka reported directly from the area hit by the flood.

Karangasem and Nusa Dua, and other areas touched by eruptions in the Semeru areas are the upcoming locations for the next G20 distribution.

Scholars Of Sustenance also proudly announced that globally, SOS has served more than 25 million nutritious meals. This achievement is accomplished due to the hard work of more than 80 employees in Indonesia, Thailand, and the Philippines. With SOS operating in three countries, the impact is huge and still growing. People’s knowledge about reducing food waste and re-purposing necessary food losses helps the world. SOS is proud to contribute to our world becoming a kinder, and cleaner place in the theme of G20 2022.

Bed And Breakfast in Fredericksburg Texas