New Documentary Explores Happiness & Wellbeing Science — from Geelong Grammar School in Victoria, to Dubai and beyond. 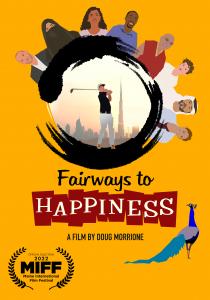 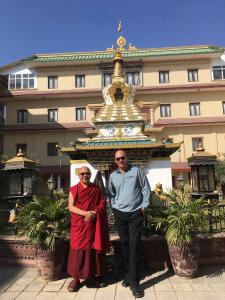 The Director Explored Several Countries to Interview Experts About “Happiness” 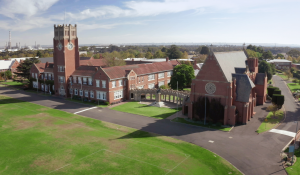 In the new film, Fairways to Happiness, an American expat in Dubai investigates ideas of happiness, while an amateur golfer attempts to conquer the course.

LOS ANGELES, CALIFORNIA, UNITED STATES, December 6, 2022 /EINPresswire.com/ — In this new documentary feature film, Fairways to Happiness, an American expat in The United Arab Emirates—the first country in the world to have established a Ministry of Happiness—investigates individual ideas of happiness and the growing emphasis on well being science and positive education in schools.

Experts and expats from across the globe — including well being science pioneer, Martin E.P. Seligman, (Ph.D., Zellerbach Family Professor of Psychology, Director of the Positive Psychology Center, University of Pennsylvania, U.S.A.) discuss the evolving needs of students, parents and schools.

“Positive education is about harnessing emerging wellbeing science, and trying to identify parts of the findings that are particularly relevant to school settings. One of the wonderful elements of positive education is that we’re able to borrow from positive psychology, behavioral economics, cognitive neuroscience, and to take that science, to translate it into a way that makes sense to teachers and enables them to augment their intuition. So, we end up with teachers and school communities that are doing what they’ve always done, and that is to care about their students, but they’re doing it in a way that’s informed and enhanced by the science.” — David Bott, Co-founder & Director/ The Wellbeing Distillery

In addition to an overview of the history of Geelong Grammar School in Victoria, Australia—a pioneer institution in the field of positive education—Fairways to Happiness also interviews parents, educators and students as they attempt to navigate the perils of a social media landscape where children are now living two lives—online and in the real world.

The story extends from the iconic skylines and golf courses of Dubai to Nepal, England, Ukraine, The United States, Bangladesh and other destinations to see how life in people’s home countries juxtaposes with their lives in Dubai.

Fairways to Happiness is a Route 201 Media production. The film was shot, directed and edited by Douglas Morrione. This is his second feature documentary and follows his award-winning film about cowboy artists from the American West: Everything in the Song is True.

Metoree, a Comparison Site for Manufacturers and Suppliers of Industrial Products, Is Available in South Africa.