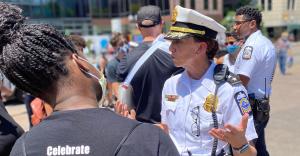 COLUMBUS, OHIO, USA, December 6, 2022 /EINPresswire.com/ — Jennifer Knight, Columbus, Ohio resident, spends her days serving as Deputy Police Chief, a role she never thought she would fill. How she got to where she is today in her law enforcement career is an inspiring story of chance and perseverance, which she tells in an exclusive interview recently announced.

“I had never previously considered law enforcement as a career,” said Knight. What she did think about was what she did not want to do, which was sitting in a cubicle. Her first exposure to law enforcement was through her husband. When the two married in their early 20’s, Knight’s husband was a Military Police in the army. Her husband was the one who encouraged her to take the Columbus test with him to get into the police department after he got out of the military. Her response to his suggestion:

“I decided to take the test, on a whim. I began this amazing journey by taking an entry-level test alongside my husband, without a clear idea of what to expect, or where this chance might lead.”

Her career choice, guided by chance, was a match made in heaven. As someone who loves to talk to people, be in the community, and face new challenges daily, Knight said she has loved being a police officer since day one. Now, almost 26 years into her law enforcement career, Knight would not have rewritten her story any other way.

Knight is the first person in her family to work in the police department. Though she started six months before her husband, Knight had the pleasure of working alongside her husband on the same precinct.

“He was the best partner I had as a patrol officer because we anticipated the other’s reactions so effectively. While many of our peers marveled at how anyone could work with their spouse, we were effective because we both respected the other person’s abilities. Additionally, the ability to share such a significant part of our life brought us closer.” Knight shares during her interview.

Though Knight was the first in her family to be a police officer, she was not the last. After her husband began working on the police force, her sister joined. Little did she know she would spend Sunday dinners sharing stories with an entire family of law enforcement.

At 40 years old, Knight decided to inspire both herself and her children by going to college. She did not have the opportunity to go to college when she graduated high school, but her continued education path as an adult led her to earn her law degree, four of the most challenging, rewarding, and best years of her life. As a firm believer in continuing education, Knight also is passionate about leadership and advocating for other women in law enforcement.

To learn more about Jennifer Knight and her story, check out all the details in her exclusive interview on Brainz Magazine.

Jennifer Knight, Deputy Police Chief in Columbus, Ohio, is known for dynamic leadership, innovative community engagement, and excellence in the field of law enforcement. After earning her Juris Doctor, she received the National Women’s Law Association Award of Excellence. Ms. Knight is a strong advocate for women in law enforcement and is a passionate community volunteer.