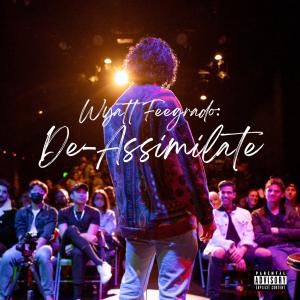 Wyatt is only 22, but is already better than comedians that I know who have been doing it for 25 years longer”

Four by Three, the Cincinnati based film studio, announced Wyatt Feegrado: De-Assimilate for release on streaming giant Amazon Prime December 29th. In the Special Wyatt covers topics such as growing up Indian in a majority white area, how the majority of names in our western culture stems from Brown Culture since the stem from the Bible, and his former girlfriend, supermodel Sara Grace Wallerstedt.

-Starred as Vinnie Corrales, a pre-school teacher who accidentally bets his life savings on the Astros winning the world series in Bettor Days on HULU and ESPN+.

-Embarked on his first European tour this year, performing in 13 countries in 2 months and ending his tour with a run at the world famous Edinburgh Fringe Festival

“Wyatt is only 22, but is already better than comedians that I know who have been doing it for 25 years longer” says Sammy Obeid, comedian and host of 100 Humans on Netflix. “I just want the world to see a comedian with the confidence of Paul Mooney, with the intellect of George Carlin tackling the systemic injustices Brown people face in an increasingly Black and White landscape. Someone who says the things Indian comedians typically wouldn’t say as a Model Minority” explains Wyatt on his Philosophy of Comedy.

Wyatt is only 23 years old, but is already an accomplished comedian, with TV and Festival Credits to his name, and with Wyatt Feegrado: De-Assimilate, we may be witnessing the birth of a star.

Wyatt Feegrado grew up in the San Francisco suburb Walnut Creek, where he was raised as the oldest of three children. After sneaking out from under his parents watch at 16 to go to his first open mic, Wyatt’s comedy career began. He soon moved to the Big Apple to attend the prestigious NYU Tisch School for the Arts, and began his career in acting and writing. You can follow him on his Tiktok, Twitter, and Instagram, all under @Wyattfeegrado, or visit his website https://www.wyattfeegrado.com