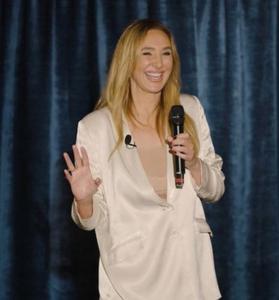 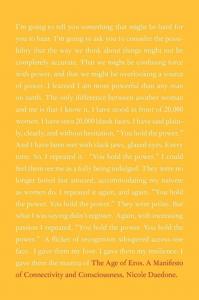 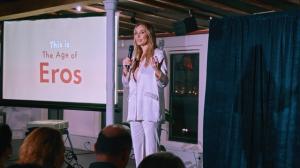 Nicole Daedone in the Age of Eros

The Age of Eros: A Manifesto of Connectivity and Consciousness

NEW YORK, NY, UNITED STATES, December 5, 2022 /EINPresswire.com/ — Nicole Daedone’s new book The Age of Eros: A Manifesto of Connectivity and Consciousness hit the shelves this month. Drawing on an intense period of contemplation, reflection and reconnecting with the earth and her own humanity over the past five years since she sold the company she co-founded, OneTaste, in 2017, Age of Eros offers a radical way forward for modern feminism: to truly embrace the power of the feminine. In The Age of Eros, Daedone urges women, women to acknowledge and revere their own innate and inestimable power. The book release coincided with Daedoen’s first public appearance in five years in New York City, on November 1, 2022, where she hosted Women over Dinner for approximately fifty prominent women leaders and conducted an OM (Orgasmic Meditation) demonstration and lecture in front of a group of over two hundred attendees. Daedone’s second public appearance, women’s dinner and live demonstration will be held in Los Angeles on December 6th, 2022.

The Age of Eros is available in hard cover and pdf. It is available for purchase and download at Soulmaker Press.

The Manifesto argues that feminism’s highest purpose is to infuse the culture with the generative qualities of feminine power. Daedone’s clear and forceful prose proposes a radical solution to the problems of dependency, insecurity, and fear: Women move the world by being fully who they are!

In acknowledging women for who they are, Daedone points to the power of ‘Call,’ a unique bioenergetic frequency emitted by women that when consciously directed attracts others to their aid and support. She warns against ‘tumescence,’ both a biological and psychological impedance to receiving and transmitting true love and connection; by dissolving tumescence through the practice of Orgasmic Meditation, Daedone argues, we can dissolve barriers to human connection.

There will surely be skeptics who doubt Daedone’s claims, but readers with a curious mind will be delighted to discover newly published scientific studies that find increasing connections between the practice of Orgasmic Meditation, and mystical experience, reduction in trauma, and increased cognitive function. The Manifesto itself brims with the confidence and conviction of someone who has walked the path she talks about.

ABOUT NICOLE DAEDONE:
Nicole Daedone is the co-founder and former owner of OneTaste, an education business that promotes Orgasmic Meditation (OM). OM is a scientifically-researched meditation modality that has promising indications in peer-reviewed studies that it may reduce the effects of trauma and stave off aging-related cognitive decline.

Born in California, Nicole graduated from San Francisco State University with a degree in feminist studies. The sudden and unexpected death of her father, who died in prison after having been convicted on 52 counts of child molestation, was a turning point for Nicole who at the time ran an art Gallery in San Francisco.

Nicole’s life’s work has been integrating ideas around female empowerment, sex and spiritual development. Her ideas spawned the founding of OneTaste in 2005 with a mission to provide people with teaching and trainings into living a desire-based life, rooted in a felt-sense of connection. In its early days – it started out as Caravan Retreats and operated as “OneTaste, An Urban Retreat Center” until 2010, the company was run by a small, passionate group of practitioners living under one roof in San Francisco.

From 2014 to 2017, the company expanded to become one of Inc 5000’s fastest growing companies with five licensed centers centers across the US and London and smaller outposts worldwide.

ABOUT SOULMAKER PRESS:
Soulmaker Press, a full-service, privately held, international publisher, based in California, works the space where intellect, science, the arts and the mystical converge to create new perspectives with deep implications.

Soulmaker Press focuses on creating an avenue for genius, both in writers and readers, to explore ideas of every kind. Inside of every work is a safe house
where imagination, wisdom and insight play without rules and constraint. We are not here to conform; we are here to breakthrough into a state of union and communion between ideas and consciousness.