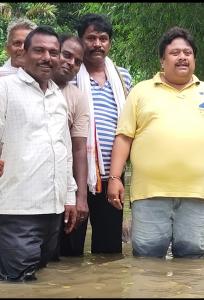 Ratikant Kanungo is among the few emerging leaders. He was one of the critical members of INC responsible for the success of the Bharat Jodo yatra in Patkura.

BHUBNESHWAR, ODISHA, INDIA, December 3, 2022 /EINPresswire.com/ — Ratikanta Kanungo lost the 2019 assembly election, which he contested as an independent candidate from Patkura. But even after losing the election, and there are more than two years in the 2024 assembly elections, he has been active in his constituency.

It has been observed that leaders are only seen during election time. Yesterday he called for a meeting with the workers of the patkura Congress to work on the strategy for the municipal corporation and local body elections.

Ratikant Kanungo is among the few mass leaders Congress has in Patkura. He has mass support of the constituency’s weaker, backward, and scheduled castes.

Also, Ratikant was one of the critical members of INC responsible for the success of the Bharat Jodo yatra in his district. Shri Ratikanta has traveled day and night to the village, town, tehsil, block, and the entire community and has held several meetings in one day in all the areas and has done the work of bringing the people of the Bhadrak district together.

This only happened due to the efficiency of Mr. Ratikanta. This is the reason why this yatra has been successful in the Bhadrak district. Because of his ground management, he has achieved a good position among the public.

It is necessary that if all the Congress workers work as hard as Ratikanta Kanungo, that day is not far away, and Congress can return to power. Ratikanta Kanungo is a man with a vision. He has the knowledge, experience, and ability to make Odisha the number-one state in India.

In our country, there are a lot of politicians, but only a few are considered leaders. Do we care about a good politician? People have left behind the idea that the government keeps the citizens uneducated because it’s easier to rule over an uneducated citizenry. But, with internet affordability, the barrier to information has been uprooted, and citizens can access information at the touch of their smartphones today.

Few people say “the present-day politicians are not good enough”; for few, “politics has never done any good,”; whereas rest are “apolitical.”
A democracy that motivates to become a superpower and the knowledge hub of the globe has struggled to keep up with the evolving nature of politics. We idolize the first generation of leaders who grew out/were products of the independence struggle against British rule.

Ratikanta Kanungo is considered the true leader in Odisha. He has started his journey from ground level and is now emerging as one of the few top leaders of Odisha.

He is considered a true statesman who believes in the Gandhian theory of politics. He fights for the rights of weaker and backward sections on the ideology of Ambedkar. He believes in nationalism like Sardar Patel. He thinks like great philosophers like Plato, Socrates, and John Locke. Today, when India lacks leaders, People like Ratikanta need to be promoted in the Upper political Space.