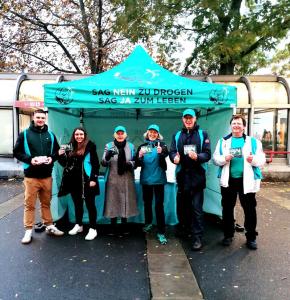 Volunteers from the Church of Scientology in Vienna bring their drug-free message to the community.

Austrian Scientologists reach out with their drug prevention program.

VIENNA, CAPITAL CITY, AUSTRIA, December 1, 2022 /EINPresswire.com/ — While drug education is often aimed at preventing youth from experimenting with drugs, it can also help substance abusers step back, take stock of what’s happening in their lives, and decide to quit or get help.

So, on a rainy and blustery November afternoon, volunteers from the Church of Scientology in Vienna took their Truth About Drugs initiative to Keplerplatz, a shopping district popular with dealers and those looking for drugs.

They wanted to reach youth and parents with their drug prevention initiative, and one of the first people they encountered was a father who brought over his daughter to sign their drug-free pledge.

People who live nearby came to their booth. “They told us they can’t use the local park anymore,” said a volunteer. It’s no longer safe. It’s been taken over by abusers and addicts.

But what the volunteers found most gratifying was that several people, who came to the neighborhood to buy drugs, saw the volunteers’ tent and came over to talk to them. “They were searching for help. And we were able to give it to them.”

According to the UN Office on Drugs and Crime (UNODC), “for every dollar spent on prevention, at least ten can be saved in future health, social and crime costs.” But the impact of drug education and prevention programs goes beyond a monetary comparison. As the UNODC adds, drug-prevention strategies contribute to “the healthy and safe development of children and youth to realize their talents and potential and become contributing members of their community and society.”

Churches of Scientology support the Foundation for a Drug-Free World. L. Ron Hubbard, Founder of the Scientology religion, wrote: “Research has demonstrated that the single most destructive element present in our current culture is drugs.”

Humanitarian groups and individuals who have adopted the Foundation’s Truth About Drugs initiative are featured in episodes of the original series Voices for Humanity on the Scientology Network. From the Czech Republic to India and from Colombia to the streets of Los Angeles, the program speaks to youth the world over.

The Scientology Network is available on DIRECTV Channel 320 and can be streamed at www.Scientology.tv, on mobile apps and via the Roku, Amazon Fire and Apple TV platforms. Since launching with a special episode featuring Scientology ecclesiastical leader Mr. David Miscavige, Scientology Network has been viewed in 240 countries and territories worldwide in 17 languages.

Digitizing Safety Programs and the Benefits of Business Process Reengineering