It is time to give Denny Hamlin his respect

With 48 Cup Series wins, Denny Hamlin has done it all in NASCAR besides winning a title. Why does he still not get the respect he deserves?

Last week, it was rumored that Denny Hamlin and long-time sponsor FedEx are each entering their final year with Joe Gibbs Racing in 2023. While Hamlin and FedEx will likely re-sign with JGR for 2024 and beyond, it is a reminder that Hamlin’s retirement from NASCAR may not be as far away as most people think.

Hamlin turned 42 in November and has driven full-time in the Cup Series since 2006, making 2023 his 18th season in NASCAR’s top division.

Age, so far at least, has not been a concern for the Virginia native. After a winless 2018, Hamlin enjoyed a career resurgence in 2019 and 2020, amassing 13 wins across the two seasons. Hamlin was not as elite in 2021 and 2022, but was still very good, recording two wins each season and advancing to at least the Round of 8 each year. However, the small decline does beg the question: Is Hamlin’s prime slowly coming to an end?

With the uncertainty surrounding Hamlin and his future, now is as good a time as any to reflect on his career and analyze why Hamlin is severely underappreciated by many NASCAR fans and media members alike.

A Hall of Fame Resume (with an Asterisk)

Hamlin’s statistics alone paint him as one of the greatest drivers of his generation. He currently sits 17th all-time with 48 wins. Among those wins are three Daytona 500s, three Southern 500s, and one Coca-Cola 600. The only crown jewel Hamlin has yet to earn is at Indianapolis. His Daytona 500 victories are tied for the third most of any driver, while his Southern 500 wins are tied for the fourth most. He is also one of only three drivers (Sterling Marlin, Richard Petty) to win the Daytona 500 in back-to-back years. Hamlin achieved the feat in 2019 and 2020.

Despite all of the success, there is one glaring blemish on Hamlin’s record: zero championships. While he has never won NASCAR’s ultimate prize, he has come mightily close several times. In 2010, Hamlin won eight races and looked poised to win the title before a late-season collapse allowed Jimmie Johnson to grab his fifth-straight championship. Since the introduction of the current playoff format, Hamlin has made the Championship 4 four times. He was arguably the best driver in the sport and the title favorite in 2019 and 2020. Unfortunately, for one reason or another, Hamlin was never able to win the final race of the year and never wore NASCAR’s title crown despite coming so close so many times.

While it may not be the distinction he wants, Hamlin will likely be regarded as the greatest NASCAR driver to never win a championship if he retires without one. Of drivers without a title, he currently sits behind only Junior Johnson (50 wins) on the all-time wins list. Assuming he does not fall off dramatically, Hamlin should move ahead of Johnson within the next two years.

In most sports, success leads to popularity and NASCAR is no different. While drivers like Dale Earnhardt Jr. and Chase Elliott became popular before winning, others like Kyle Larson, Jeff Gordon, and Dale Earnhardt Sr. saw their popularity grow as their success did. For Hamlin, however, this is not the case. Despite being one of the best drivers since the mid-2000s, Hamlin has never gained a large following.

The lack of support is best seen at the track on race day. At any given race, the number of fans wearing Hamlin merchandise is few and far between. While former teammate Kyle Busch has his own merchandise trailer and other peers dominate large portions of their respective teams’ trailers, Hamlin’s merchandise is relegated to a small corner of the Toyota team trailer. Hamlin is simply not popular and it is curious to wonder why.

Does Hamlin need a championship to become popular? No, not really. Current drivers like Ryan Blaney and Bubba Wallace already have a large fanbase despite not winning much in their early careers. The same goes for rookies Ty Gibbs and Noah Gragson.

Mark Martin, Hamlin’s predecessor in the “No Title Club”, had a huge following during his career despite never winning a championship. Martin earned his fans despite not having the success of Hamlin (40 wins, two Southern 500s, one Coke 600). Although he no longer races, Martin may still be more beloved than Hamlin as popular YouTube channel S1apSh0es recently made an hour-long video essay detailing Martin’s career. It is safe to say that nobody is making hour-long features on Hamlin anytime soon.

The other possible answer for Hamlin not being popular is that many fans think he is unlikeable or unrelatable. He has been accused of coming across as “whiny” or “entitled” during his interviews. He is also not afraid to criticize NASCAR, something that often rubs fans the wrong way.

The driver of the #11 has gotten into several feuds as well, most notably with Joey Logano in 2013 and 2019. He also was wrecked for the win by Alex Bowman at Martinsville in 2021 and then confronted Bowman during his burnout. When Hamlin got out of his car after each altercation, he was routinely met with a shower of boos even if the incidents were not his fault. If Bowman had wrecked Chase Elliott for the victory, Bowman likely would have been the one scrutinized. Instead, he was celebrated for taking down the “villainous” Hamlin.

Following his 2022 altercation with Ross Chastain at Pocono, Hamlin was booed again despite him finally getting some retribution against Chastain. Hamlin was even booed at Martinsville after Chastain’s “Hail Melon” that knocked the #11 out of the Playoffs. Most funny of all, the booing occurred while Hamlin was praising Chastain for the incredible move.

Fans don’t like Hamlin, but he is not the first NASCAR driver to suffer this fate. Kevin Harvick, Kyle Busch, Jeff Gordon, and Tony Stewart often faced the same criticisms as Hamlin. The only difference is, however, that for all the people that hated those drivers, each of them had just as many who absolutely loved them. Hamlin, unfortunately, does not enjoy that type of love.

How will 23XI Impact Hamlin’s Legacy?

Hamlin has not let his lack of popularity impact his desire to invest in the sport. He formed 23XI Racing alongside NBA legend Michael Jordan in 2021 with Bubba Wallace serving as their inaugural driver. The team expanded to a two-car operation in 2022 with Kurt Busch joining to pilot the #45. Following Busch’s injury and subsequent retirement, Tyler Reddick will be taking over the #45 in 2023.

While they have had the growing pains expected of a brand-new team, 23XI appears to be headed in the right direction. Wallace has steadily improved across his two seasons. He recorded career-highs in top fives (5), top tens (10), and poles (1) while also winning at Kansas in 2022. Coming off a career year with RCR that saw him win three races, Reddick joins a stout #45 team. Before Kurt Busch was injured, the team won a race and was a legitimate playoff threat. Both drivers should seriously contend for the Playoffs and beyond in 2023. 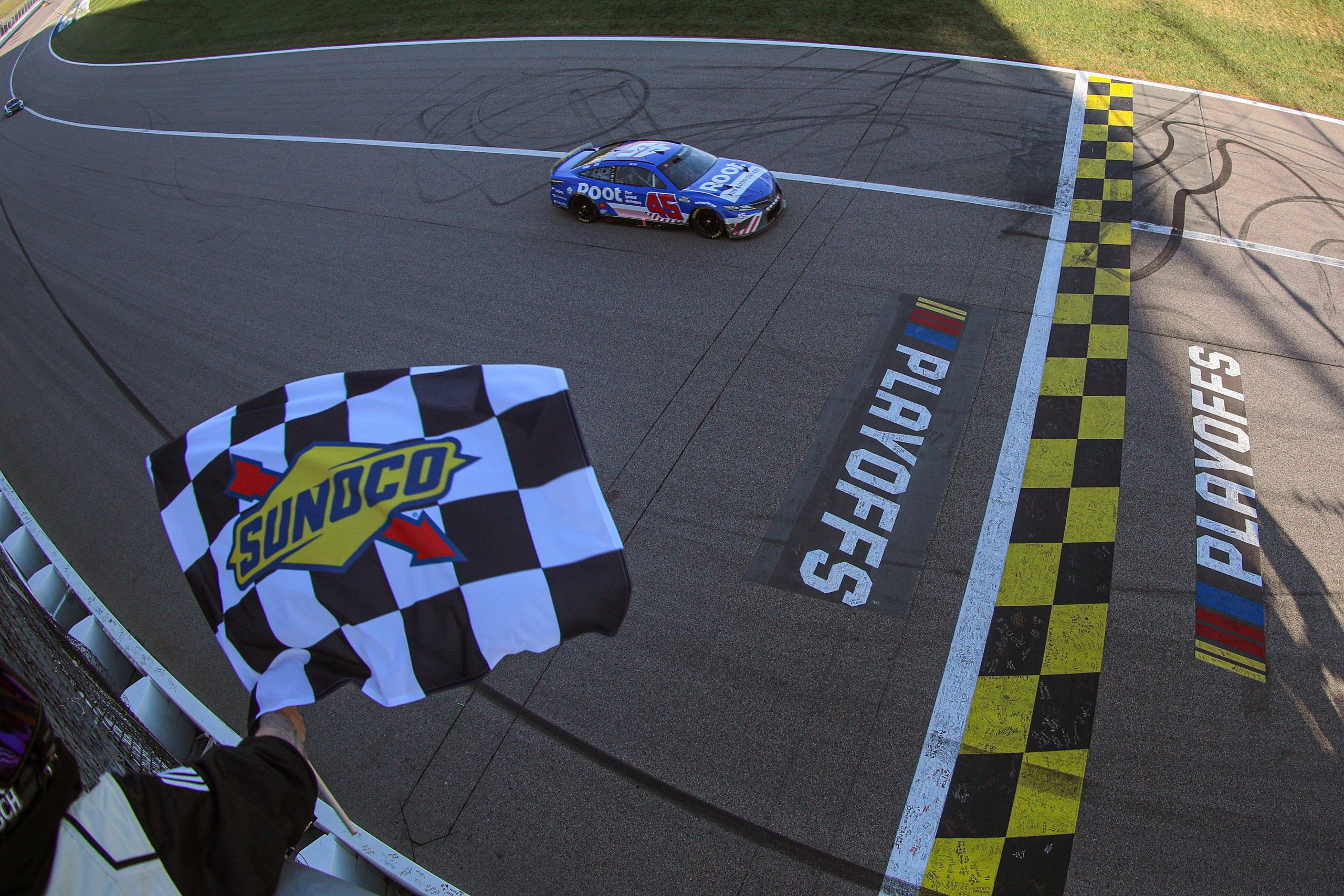 With the growth of 23XI in just two years, could ownership be Denny Hamlin’s way of finally earning the respect he deserves? Although Jordan is involved, Hamlin is the clear head of the organization. Much of 23XI’s development is a result of his hard work. Even if he never wins a championship as a driver, it would likely be just as fulfilling and impressive to win a championship as an owner.

Hamlin’s ability to balance the driver-owner role should be noted as well. While other drivers like Brad Keselowski have seen their performance decline once becoming an owner, Hamlin has continued to be elite. He won seven races in 2020 while forming 23XI. He then won two races in both 2021 and 2022 while serving as a full-time owner. Hamlin also made the Championship 4 (2020, 2021) or Round of 8 (2022) in each of those three seasons.

23XI’s continued improvement should only add to Denny Hamlin’s legacy as an all-time great after his driving career is over.

Denny Hamlin Needs to be Appreciated

Through his work on and off the track, Denny Hamlin is one of NASCAR’s greatest and most influential stars. Hamlin rose from humble beginnings in Chesterfield, Virginia to reach the top of the NASCAR landscape. This makes him an inspiration to all small-town racers dreaming of making it to the Cup Series.

While he occasionally runs into issues, Hamlin shows great personality, which many drivers lack. He is outspoken and not afraid to speak his mind on anything going on in NASCAR. Hamlin’s opinions have helped the sport grow in recent years and helped improve the Next Gen car.

Hamlin owns one of the greatest quotes in NASCAR as well. After their dust-up at Martinsville in 2019, he mocked Joey Logano’s voice and said:

Hamlin has also quietly become one of the most accessible NASCAR drivers in recent years. This has helped the sport rise in popularity. In a sport where many stars put up barriers, Hamlin has welcomed fans into his world. Last season, he helped produce Netflix’s Race: Bubba Wallace. The documentary dove into Bubba Wallace and 23XI Racing during the 2021 season. The series gave fans a behind-the-scenes look at the inner workings of a race team. It also helped to attract new fans to NASCAR.

In addition to the documentary, Hamlin frequently appears on popular NASCAR podcasts like TheDale Jr. Download, Door, Bumper, Clear, and Stacking Pennies. He is also very active on Twitter. Through it all, Hamlin remains completely true to himself, giving fans an honest look into the sport.

His personality and accessibility mixed with his on-track success make Denny Hamlin the ultimate NASCAR driver, even if he is never treated as such. As he nears the twilight of his career, it is time that everyone gives him the love that he deserves.