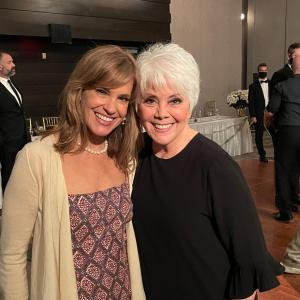 In the musical (yes, she sings) DeWitt plays a waitress named Rita who finds herself assigning good deeds to guardian angels as they mix with the lively third shift at a Nashville Waffle House. She is dealt a Christmas Eve surprise when another lady-in-limbo assigns her the task of finding her lonely widower a new wife. The musical features a book by Kaine Riggan and a score by dozens of Nashville songwriters including Randy Travis, Paul Overstreet and T. Graham Brown, who also appears in the play.

In a recent CBS interview promoting the musical, DeWitt said, “It’s a wonderful piece of writing. It’s my favorite kind of material, it’s very, very funny and there are moments that are deeply touching – that the truth of the human heart is just so naked on the stage.”

DeWitt then makes a striking entrance with white hair as “Nana” in writer/director Tom Malloy’s “Ask Me to Dance”. The premise follows Jack (played by Malloy) and Jill (Briana Evigan) who separately see a fortune teller who tells them they will meet the love of their life before midnight on New Year’s Eve, which happens to be only five days away. The countdown begins, and both Jack and Jill go on a series of horrible and hilarious dates, each worse than the next. Each time, they barely miss meeting each other.

DeWitt deals some of the film’s best comedic one-liners alongside co-stars Mario Cantone and Canadian actress Catherine Mary Stewart (Days of Our Lives and Weekend at Bernie’s).

“A Scattered, Smothered and Covered Christmas” is available for a limited time on BroadwayOnDemand.com and streams for free at www.WaffleHouseMusical.com. “Ask Me to Dance” is available to rent for $3.99 on Amazon Prime Video, VUDU and AppleTV.

4th Quarter Writers and Illustrators of the Future Contests