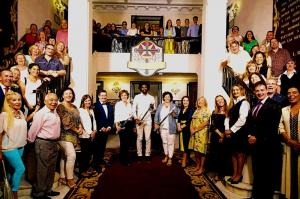 Jurists, academics and human rights proponents join the Church of Scientology for a religious freedom conference in Spain.

MADRID, CAPITAL, SPAIN, November 20, 2022 /EINPresswire.com/ — In celebration of the 42nd anniversary of the Scientology religion in Spain, Fundacion Mejora, the Foundation for the Improvement of Life, Culture and Society, presented the 9th annual Religious Freedom Awards at the Madrid-based National Church of Scientology of Spain.

The Church, which was entered into Spain’s National Registry of Religious Entities in 2007, embraces religious freedom as a fundamental belief. This is expressed in the first clause of the Creed of the Church of Scientology written by Scientology Founder L. Ron Hubbard: the belief “That all men have inalienable rights to their own religious practices and their performance.”

Ms. Isabel Ayuso, Secretary General of the Fundacion Mejora, opened the ceremony by acknowledging Spain as an example of a country that has moved from being a confessional state—one officially endorsing a single faith—to a nonconfessional state—one that endorses religious pluralism. Ayuso then spoke of the many countries that not only fail to recognize their citizens’ rights to religious freedom but actively work against it.

“In Russia, Jehovah’s Witnesses are persecuted and condemned every day simply for meeting with one another. In Tibet, Buddhists and Muslims are punished and ‘re-educated’ for practicing their religion. And Christians are severely persecuted in many parts of the world. Clearly, freedom of religion is a goal we have not yet achieved.”

Those receiving the Foundation’s Religious Freedom Awards were:

* Ana María Vega Gutiérrez, professor of law at the University of La Rioja.

Each awardee received a replica of “Tizona,” the sword once carried by El Cid, the legendary hero of medieval Spain. Tizona is a symbol of wisdom, strength, moderation and justice. The award is inscribed with the message: “The Spanish Constitution and the Universal Declaration of Human Rights hold religious freedom as a human necessity, tied as it is to the eternal search for the origin of reason, life and all creation.”

Mercedes Murillo, Director of Religious Freedom in the office of the Prime Minister, praised the awardees for their commitment to protecting and advancing human rights.

Mejora Foundation president Ivan Arjona, who also heads the Church of Scientology European Office of Public Affairs and Human Rights, thanked the awardees, those attending, and the Foundation’s many volunteers and sponsors for their continued efforts for and support of religious freedom and human rights for all.

Among the distinguished guests and public officials attending were the Ambassador of Armenia, professors, religious scholars, dignitaries, and the director of the Pluralism and Coexistence Foundation.

Mejora Foundation takes its name from the Spanish word meaning “improvement.” The Foundation, which earned Special Consultative Status to the United Nations in 2019, is committed to “human development through respect for and observation of Universal Human Rights as well as the application of core values such as equality, tolerance, respect for human life, peace, democracy, and individual freedom.” Its mission is to “defend, promote, teach and disseminate Human Rights as included in the Spanish Constitution, the Universal Declaration of Human Rights and other international covenants; to promote pragmatic Scientology values and practices developed by Scientology Founder L. Ron Hubbard aimed at improvement of the individual and society; and to promote tolerance in all aspects of civil society.”

The National Church of Scientology of Spain, located in the heart of Madrid, was dedicated in 2004 by Scientology ecclesiastical leader Mr. David Miscavige. It is designed to provide ideal facilities for Scientologists on their ascent to higher states of spiritual freedom and to serve as a home for the entire community—a meeting ground of cooperative effort to uplift people of all denominations.