By Adrian Bishop For Mailonline

Jamie Carragher has taken to social media to jokingly take a dig at Gary Neville whilst also reigniting his feud with Richard Keys.

Neville made his debut appearance on the Qatari broadcaster beIN Sports for the opening game of the 2022 World Cup as hosts Qatar took on Ecuador, appearing alongside Keys, Andy Gray, and fellow former England international John Terry,

Carragher shared a screenshot of the pundits on his Twitter, accompanied with the caption ‘Say hello to my big mate Keysie @GNev2’, followed by a kissing emoji. 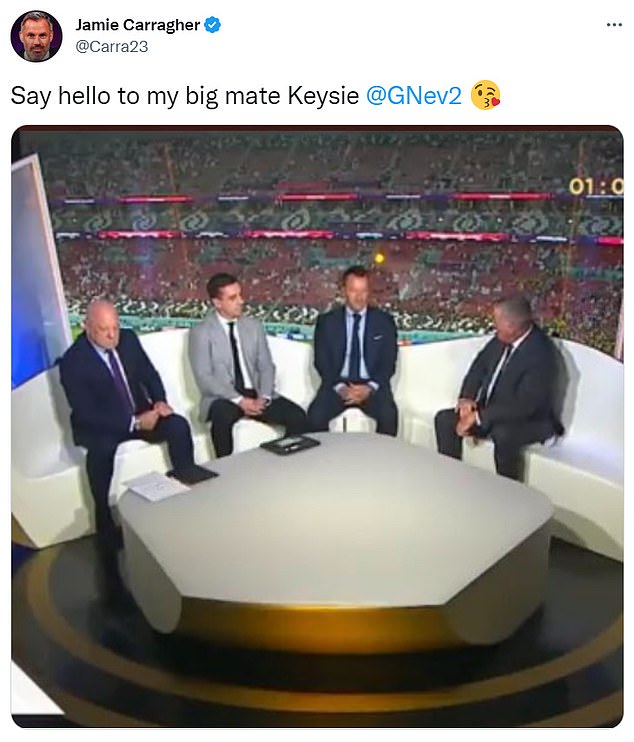 The two Champions League-winning defenders are renowned for their Premier League coverage on Sky Sports but the pair’s relationship with Keys has not historically been as positive.

Keys, who alongside Gray was sacked by Sky in 2011 for making sexist comments off air, recently compared the Liverpool legend’s behaviour with CBS Sports co-host Kate Abdo to his own controversial remarks.

More than a month after the original broadcast, the 65-year-old wrote on Twitter: ‘Having found myself in a lot of bother – largely of my own making – I was really surprised to find that this sort of behaviour is apparently ok in a TV studio these days.’

But it is not only Carragher who has been the target of an disparaging remark online from Keys.

The veteran broadcaster previously took aim at his now-colleague after Neville questioned why BT Sport had not given more coverage to the crowd trouble that had marred the Champions League final in May, writing that the rival broadcaster ‘Can’t react or aren’t agile to things like this happening.’

Keys hit back at Neville’s comments at the time and even accused the former Manchester United star of instigating the ‘riot’ that led to the club’s May 2021 fixture with Liverpool being called off after fans broke into Old Trafford on matchday.

Keys wrote at the time: ‘F*** me @GNev2, Is there nothing you’re not an expert on? I’ve worked with guys @BTSport & they’re top pros as @mrjakehumphrey has said.

‘I’m quite certain Saturday was a challenging night for everyone. Just like covering the OT (Old Trafford) riot you instigated & covered badly at Sky.’