Because Addiction is No Laughing Matter 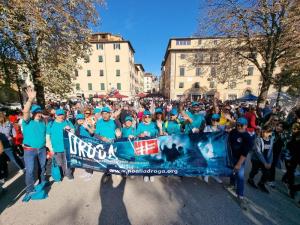 Say No to Drugs Association brought the truth about drugs to the annual Lucca Comics & Games convention in Lucca, Italy.

A drug-prevention association sponsored by the Churches of Scientology of Italy brought the Truth About Drugs to one of the largest comic conventions in Europe.

LUCA, TUSCANY, ITALY, November 20, 2022 /EINPresswire.com/ — More than 300,000 thousand visitors attended the 56th annual Comics & Games convention in Lucca, Italy. It was a living example of the popularity of comics, and the games, films and TV series they inspire. Fans dressed as characters from their favorite comics and films. They gathered with others who share their passion, met creators, artists, actors and experts, and learned about what’s new and what’s on the horizon.

The entire industry grew out of the comic books, first published in the United States and the UK in the 1930s during the great depression. At first, comic books reprinted the newspaper “funnies”—the humorous newspaper comics of the day. Well before Superman began the superhero genre, comics were a way to lighten spirits at a time when laughter was at a premium.

But the team of volunteers from the Say No to Drugs Association who brought their Truth About Drugs initiative to the Luca convention reached out to convention-goers to make the point that real superheroes don’t have to resort to drugs, and substance abuse and addiction are no laughing matter.

According to the European Monitoring Center for Drugs and Drug Addiction, across Europe, overdose is a leading cause of avoidable death among people who use drugs. And the 2022 European Drug Report found there were 5,800 deaths involving one or more illicit drugs in the European Union in 2020. What’s more, 52 new drugs were reported in Europe for the first time in 2021, bringing the total number of NSPs (New Psychoactive Substances) monitored by the Center to 880.

Dressing in their iconic teal T-shirts the Say No to Drugs volunteers handed out more than 16,000 The Truth About Drugs booklets to those attending the convention.

Produced by Foundation for a Drug-Free World, these simple, youth-friendly booklets provide facts about the most commonly abused drugs, including hashish and marijuana, ecstasy, cocaine, heroin, crack, LSD, amphetamines, alcohol, opioid painkillers, and other prescription drugs. They inform the reader of the short and long-term effects of these substances on the body and mind. Along with these booklets, the Foundation produces public service announcements on each of these classes of drugs. And the hard-hitting feature-length Truth About Drugs: Real People, Real Stories documentary interviews former addicts who survived addiction and lived to tell their tale.

Italian Say No to Drugs volunteers have distributed more than 12 million Truth About Drugs booklets at sports events, concerts, conferences, in lectures to primary and secondary school students and in high-traffic areas of cities throughout the country.

They are driven by the purpose to reach young people before drug dealers do.

Churches of Scientology support the Foundation for a Drug-Free World. L. Ron Hubbard, Founder of the Scientology religion, wrote: “Research has demonstrated that the single most destructive element present in our current culture is drugs.”

Humanitarian groups and individuals who have adopted the Foundation’s Truth About Drugs initiative are featured in episodes of the original series Voices for Humanity on the Scientology Network. From the Czech Republic to India and from Colombia to the streets of Los Angeles, the program speaks to youth the world over.

The Scientology Network is available on DIRECTV Channel 320 and can be streamed at www.Scientology.tv, on mobile apps and via the Roku, Amazon Fire and Apple TV platforms. Since launching with a special episode featuring Scientology ecclesiastical leader Mr. David Miscavige, Scientology Network has been viewed in 240 countries and territories worldwide in 17 languages.

Buy a $60 Raffle Ticket Before March 2023; Get a Chance to Own a Million-Dollar Victorian B&B in Ireland

United Fight Alliance and “For the Fighter in You” announce 3-Part Podcast Series: “Conversations with Carnivores”

United Fight Alliance and “For the Fighter in You” announce 3-Part Podcast Series: “Conversations with Carnivores”