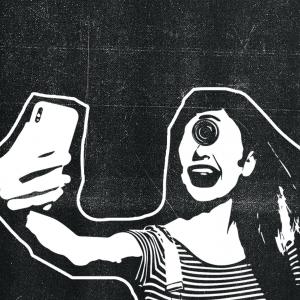 Real life happens in front of me, not on a screen.”

“‘Attention Junkies’ is an observation of the current cultural phenomenon of presenting fake versions of ourselves to the world via social media,” says Nate Parrish. “Our addiction to dopamine hits that come from the affirmation of strangers, and the need to constantly one-up our previous ‘hot take’ as we build our tolerance to the drug that is attention. It’s mostly a warning to myself that real life happens in front of me, not on a screen.”

That warning is born up by punk rock riffs and a horn section that feels like a subtle love letter to ska. The thrust of the lyrics is summarized by the sobering question: “Can we exist without an audience?”

Parrish personally wrote, produced and played the bulk of the instruments on the song, as he did on the whole Soul Surgery album. True to form, he also produced the lyric video himself through his design company Black Pastel.

The “Attention Junkies” lyric video comes several months following the release of Soul Surgery, which hit streaming services in April of this year. The album followed up the guitarist and vocalist’s 2020 sleeper hit I’m A Wreck. Like his debut, Soul Surgery has continued to resonate for listeners with its bracingly honest social commentary.

Reflecting on the feedback he’s heard, Nate says “I think I’ve been able to articulate some things on that album that people have been feeling and wanting to say, but maybe they are convinced that they are alone in their feelings. It’s been cool to get messages about specific songs and how they resonate with people.”

Never one to slow down for long, Nate Parrish is already working on writing his third solo album. He’s also continuing to play live shows with Kutless.