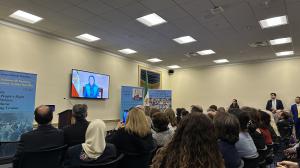 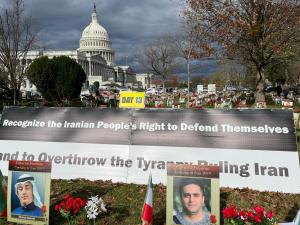 OIAC held a Briefing on Capitol Hill during which bipartisan members of Congress, expressed support for the unfolding uprising for democratic republic in Iran.

In America through the founding fathers’ vision, of course we have the second amendment, we have the right to keep & bear arms and to defend ourselves. Why shouldn’t Iranians?””

Part of its weeks long campaign aimed at elevating the voice of pro-democracy protesters, the event featured passionate bipartisan calls to recognize the Iranian people’s right to self determination and self-defense.

Addressing the US House Representatives, Maryam Rajavi, President-elect of the parliament-in-exile National Council of Resistance of Iran, said in her remarks, “The American Declaration of Independence states that whenever a government becomes destructive of its citizens’ rights to Life, Liberty, and the pursuit of Happiness, it is the People’s Right to alter or abolish it and to institute a new Government, laying its foundation on such principles.”

Referencing OIAC photo exhibition on the lawn of the U.S. Capitol and the images of the freedom fighters killed by the clerical regime in Iran, Rep. Sheila Jackson-Lee said, “As I drove in this morning, as Steve Cohen (D-TN) and Judy Chu (D-CA) drove in, we could not miss the accounting of those innocent heroes on the lawn who had lost their life to the brutality of the mullahs and each succeeding leader while the brave Madame Rajavi, the President of Iranian Resistance, stood in Paris, holding up their bloodstained banner but saying, “I will never give up.”

Rep. Tom McClintock (R-CA) said in his remarks, “Bipartisan members of Congress who have sponsored H.Res.118,..has declared its judgment that the regime in Tehran is illegitimate and dangerous to the cause of peace and freedom:”. In referencing former Secretary of State Michael Pompeo visit to Ashraf-3 in Albania, Rep. McClintock added, “Our national security, the peace and stability of the entire region and above all, the Iranian people’s right to freedom and democracy demand that Congress stand behind the opposition and that this administration speak out and act in their support.”

Rep. Brad Sherman (D-CA) said, “I stand today with the brave Iranian women and men risking their lives to fight for this future across Iran and I stand with so many advocates for women’s rights including Madame Rajavi, who have risked their lives. And somehow, I always knew that if we were going to bring democracy to Iran, it was going to be the women who would do it… This is not a protest. This is a revolution.”

In his remarks, Congressman Joe Wilson (R-SC) said, “I want to commend you. The display that you have on the Capitol grounds. The American people need to see that. And so I’m just so hopeful that there’s proper coverage of that in every way.”

Congressman Randy Weber (R-TX) spoke of more than 40 years of women leadership in the ranks of the Iranian opposition and noted, “And speaking of women, don’t y’all love what Mrs. Maryam Rajavi’s doing? Don’t you love that? My gosh. I’ve been able to Zoom meet with her and talk to her and follow her and listen to her.”

Addressing the life and death struggle protesters in Iran are engaged in, Mr. Weber then added, “The Universal Declarations of Human Rights should apply to Iran and all people…In America through the founding fathers’ vision, of course we have the second amendment, we have the right to keep and bear arms and to defend ourselves. Why shouldn’t Iranians?”

Congressman Steve Cohen (D-TN) noted, “I am a co-chair of the Congressional Iran Human Rights and Democracy Congress and the co-chair of the Helsinki Commission.” He then said, “Freedom is so important and the young women and others in Iran are showing that they will stand for it. They will resist, they have resisted, they are heroes, and I admire them greatly and I feel for them.”

Rep. Scott Peters (D-CA) noted, “Mr. McClintock, he’s a republican. I’m a democrat. We don’t often agree on a lot. But we agree on this.” He then added, “We are your allies in terms of freedom. Our hearts break for the people and the way they’re being treated but we also know that it’s a struggle that’s righteous and we can’t win it for them, but we can speak for them, and we’ll continue to do that. They have a right to defend themselves.”

Rep. Abigail Spanberger of the House Foreign Affairs Committee said, “I wanted to express my steadfast support and commend the bravery, the courage, the resolve of these young women and men as they demand their basic freedoms and stand up to the regime in the face of appalling intimidation, violence, and detentions.”

Referencing the brave women in Iran, Rep. Lance Gooden (R-TX) said, “I want to encourage the young people and the women who are standing up in Iran and perhaps watching this. I know it is difficult and scary, but we support you in the United States as members of Congress.” He then added, “We support the 10-Point Plan that Madam Rajavi has put out.

Congresswoman Judy Chu (D-CA) who had earlier introduced representatives Jackson-Lee and Cohen concurred with the statements of her aforementioned colleagues.

In August, 2022, Organization of Iranian American Communities (OIAC) launched a campaign in support of the Iranian people’s struggle for democratic Iranian republic. Iranian Americans have been gathering on Capitol Hill, outside UN Headquarters in NYC, and in a series of events related to U.S. Congress. These activities have included Candle Light Vigils, Photo Exhibitions, and advocacy to help bolster support for relevant Congressional Resolutions.

Rep. Tom McClintock speaks about Iran Protests on the floor of U.S. House of Representatives

Creighton soccer has ‘no quit’ preparing for No. 1 Washington in NCAA second round

Creighton soccer has 'no quit' preparing for No. 1 Washington in NCAA second round