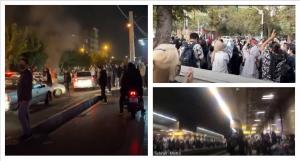 The uprising in Iran marked its 62nd day on Wednesday and passed a certain milestone on Tuesday as people in many cities checkered across the country the third anniversary of the Nov.2019 uprising and raised the current uprising to new levels for freedom. 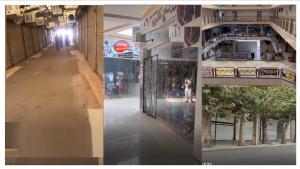 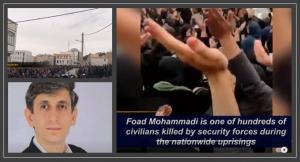 The city of Kamyaran also saw mass protests on Wednesday as locals gathered to mourn the death of Foad Mohammadi, killed by security forces two days ago. Authorities forced his family to bury him in the dark of the night to prevent mass protest rallies. 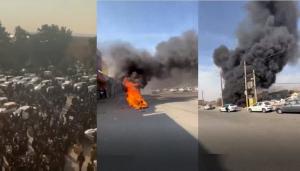 Protests were also reported in Tehran’s Metal Bazaar, where security forces attacked protesters with teargas and tried to disperse them. The protesters resisted and prevented the repressive forces from breaking their rallies. 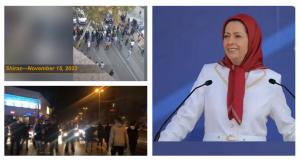 NCRI president-elect Maryam Rajavi hailed the Iranian people and said “At the beginning of the third month of Iran’s uprising, the brave women, men, and youths of Iran held protests, strikes, in more than 50 universities and 50 bazaars across the country.”

The city of Kamyaran saw mass protests on Wednesday as locals gathered to mourn the death of Foad Mohammadi, shot and killed by security forces two days ago.

In Tehran, there were demonstrations in several locations, including metro stations, the Grand Bazaar, Amir Kabir Street, and San’at Square. The people of Gohardasht, Karaj also held protest rallies.”

PARIS, FRANCE, November 17, 2022 /EINPresswire.com/ — The nationwide uprising in Iran, which marks its 62nd day on Wednesday, passed a certain milestone on Tuesday as people in dozens of cities checkered across the country marked the third anniversary of the November 2019 uprising and raised the intensity of the current uprising to new levels against the mullahs’ regime.

Protests in Iran have to this day expanded to at least 220 cities. Over 550 people have been killed and more than 30,000 are arrested by the regime’s forces, according to sources of the Iranian opposition People’s Mojahedin Organization of Iran (PMOI/MEK). The names of 402 killed protesters have been published by the PMOI/MEK.

The city of Kamyaran also saw mass protests on Wednesday as locals gathered to mourn the death of Foad Mohammadi, shot and killed by security forces two days ago.

Iranian authorities forced his family to bury him in the dark of the night on Tuesday to prevent mass protest rallies. But the citizens showed up the next morning and held a massive rally, in which they vowed to continue his path and chanted slogans against the regime.

Security forces tried to disperse the protesters by opening fire on them. But the people held their ground and resisted with bare hands and forced the repressive forces to retreat.

Protests were also reported in Tehran’s Metal Bazaar, where security forces attacked protesters with teargas and tried to disperse them. The protesters resisted and prevented the repressive forces from breaking their rallies.

People across the country have been chanting anti-regime slogans specifically targeting top-tier officials. “Death to Khamenei!” “Death to the dictator!” and “Death to the oppressor! Be it the Shah or [Khamenei]!” are being shouted in a rising number of cities as the Iranian nation is sending a clear message of “Game over!” to regime Supreme Leader Ali Khamenei in Tehran and his entire apparatus.

Meanwhile, in Tehran, protest rallies continued in several locations despite heavy security measures, including Metal Bazaar and Shush Square. Citizens sighted helicopters flying over the city to control and quell the protests.

In Mashhad, protesters lit fires in the streets and held protest rallies. When security forces were dispatched to quell the demonstrations, the protesters held their ground and resisted them.

Protests and clashes continued in Tehran’s Shadabad Metal Bazaar throughout the day. According to citizens, protesters and security forces clashed for more than five hours. Security forces opened fire on the protesters and used teargas and live ammunition against unarmed civilians.

At the same time, protests continued in other parts of Tehran and the people continued their rallies despite facing police brutality. Several videos show security forces beating and shooting at protesters.

Protests also continued in several other cities across Iran on Wednesday. The situation was especially tense in Sanandaj, where security forces cracked down on a protest rally by the students of Kurdistan University.

Videos show security forces shooting at the students, who have nothing to defend themselves.

In Izeh, protesters set fire to a regime building in protest of the brutal crackdown on peaceful rallies. In many cities, protesters lit fires in the streets and prevented security forces from commuting to crack down on protests.

On Tuesday, at least 50 of the country’s largest universities, more than 30 districts of the capital Tehran, and dozens of cities throughout Iran were scenes of major anti-regime rallies, gatherings, protests, and demonstrations.

The people began their protests with strikes in most of the country’s metropolitan cities and continued well into the night with protesters setting up roadblocks to establish control over their districts and prevent the regime from dispatching its security forces.

Intense confrontations were reported both in Tehran and other cities, and more specifically the country’s Kurdish cities in the west, and n Strikes spread to dozens of cities, including Isfahan, Kish Island, Lahijan, Shiraz, Yazd, Arak, Marvdasht, Najafabad, Kermanshah, Oshnavieh, Marivan, Miandoab, Zahedan, and Bandar Ganaveh.

In Tehran, the shop owners of Manuchehri Bazaar and Tehranpars, among other areas, also joined the strikes. At the same time, students in many cities resumed their protest rallies on Tuesday, Babol, and Tehran.

The people of Iran marked the anniversary of the November 2019 uprisings by holding protest rallies and chanting anti-regime slogans. In Shiraz, the people set roadblocks at the Molasadra crossroads and demonstrated.

In Tehran, there were demonstrations in several locations, including metro stations, the Grand Bazaar, Amir Kabir Street, and San’at Square. The people of Gohardasht, Karaj also held protest rallies.

Reports from many cities indicate that protesters were continuing their protest rallies despite the regime’s brutal response. Security forces attacked student rallies in Tehran’s Amir Kabir and Sharif Universities and violently arrested several students but were met with the resistance of other protesting students.

In other parts of Tehran, security forces opened fire on protesters and even fired teargas at a hospital. Nonetheless, reports from many cities, including Tehran, Shiraz, Karaj, and Sanandaj show that the people were determined to make their voices heard by continuing their protests and resisting oppression. At the same time, strikes continued in dozens of cities, which has raised grave concerns among regime officials.

In Kamyaran, protesters managed to wrest control of one of the bases of the Revolutionary Guards. In Lahijan, Shahriar, Gorgan, Shiraz, and Isfahan, protesters continued their rallies and resisted when security forces tried to disperse them. In Markazi province, protesters routed security forces and set fire to a number of police vehicles.

Iranian opposition the National Council of Resistance of Iran (NCRI) President-elect Maryam Rajavi hailed the Iranian people for their brave and relentless protests in the ongoing revolution against the mullahs’ regime.

“At the beginning of the third month of Iran’s uprising, the brave women, men, and youths of Iran held demonstrations, strikes, and protests in more than 50 universities and 50 bazaars across the country, renewing their pledge with the martyrs of the November 2019 uprising,” she said.

“Iran’s uprising will forge ahead until victory. With the sacrifices and determination of Iranian women and men, Iran’s democratic revolution will overcome religious fascism, and all reactionary and colonialist plots,” the NCRI President-elect added.

The protests in Iran began following the death of Mahsa Amini. Mahsa (Zhina) Amini, a 22-year-old woman from the city of Saqqez in Kurdistan Province, western Iran, who traveled to Tehran with her family, was arrested on Tuesday, September 13, at the entry of Haqqani Highway by the regime’s so-called “Guidance Patrol” and transferred to the “Moral Security” agency.

She was brutally beaten by the morality police and died of her wounds in a Tehran hospital on September 16. The event triggered protests that quickly spread across Iran and rekindled the people’s desire to overthrow the regime.

On Nov. 15, the people in Iran marked the third anniversary of the 2019 uprising, where 1500 were killed. The morning began with strikes in several cities.

Walmart’s $3.1 Billion Settlement, Plus Those From CVS and Walgreens, Will Fund Change in Opioid-Struck Communities