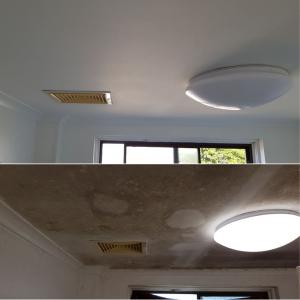 SAN-AIR spray cleaned the mould from this ceiling, killing the mould spores. 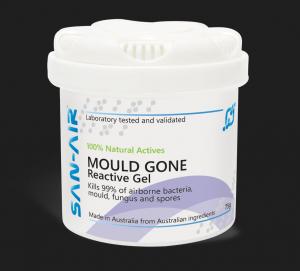 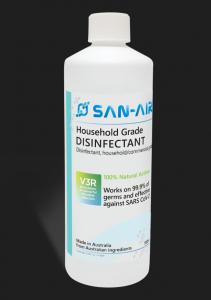 SAN-AIR spray can clean the mould from your ceiling or walls effectively.

Mould can only live if it has some food and mould will use dust as food. So, if you keep your home as clean as possible, the mould will have less dust to feed on.”

SYDNEY, NSW, AUSTRALIA, November 18, 2022 /EINPresswire.com/ — A recent survey conducted by Finder has found nearly half of all NSW residents are now dealing with a mould problem after this year’s months of rain and flooding on the east coast. This is followed closely by 42% of Queenslanders who are finding they have to deal with mould problems in their homes.

These high numbers are because both NSW and Queensland have had one of the wettest years on record due to La Nina and when it rains this much, the constant humidity and moisture create constant damp conditions – and these are ideal conditions for mould to grow.

When humidity levels are higher than 70% inside the home, this usually leads to mould growth as long as there’s some dust or drywall for the mould to feed on. We’ve had these conditions for months in many parts of Australia and the situation has been so serious, some state governments including NSW, have set up emergency flood payments for those impacted by floods. Thousands of Australian households have used these payments to remediate parts of their homes from mould.

What can we do to prevent the growth of mould?

The constant high humidity makes it difficult to keep your home clear of mould. Daniel Massaioli is the founder of a company called SAN-AIR which makes specialised products which kill mould spores in air spaces and on surfaces and this reduces the mould growth.

Mr Massaioli agrees the recent weather conditions have increased the amount of mould he’s seeing in homes around NSW, saying: “We’re almost seeing mould in plague proportions this year. All types of mould breed when the humidity is at or over 70% – and you only need temperatures to be between four and 39 degrees and you have ideal conditions for mould growth.”

“You’re best off trying to prevent mould, rather than trying to deal with the after-effects of it,” he adds. “You can stop mould in its tracks by ensuring your home has enough ventilation and isn’t dusty. You need to check all of your home’s plumbing and also the roof and the walls, because mould feasts on leaks.”

“If there are any leaks in your home or drainage problems, then moisture from the rain can pool in the subfloor, the roof cavity or even around the window frames – and this will often lead to mould growth,” Mr Massaioli adds.

He said another useful tool to prevent mould from growing in our homes is a dehumidifier and with the sort of weather we’ve been having, it’s best to have a small one in each bedroom and a larger one for the living area. “Dehumidifiers will keep the humidity levels down if you keep them running whenever it’s humid,” says Mr Massaioli.

“With the weather conditions we’re seeing forecast for the coming summer months, some dehumidifiers would be a wise investment but be sure to check if your air conditioner has a ‘dehumidifier’ setting as this will do the same work as a dehumidifier,” he says.

Mr Massaioli adds the other most important thing you can do to avoid mould is to clean and maintain your home because: “Mould can only live if it has some food and mould will use dust as food. So, if you keep your home as clean as possible, the mould will have less dust to feed on. This means dusting your home at least once a week and then vacuuming throughout – using a vacuum with a HEPA filter.”

“The reason we developed these products was to help people reduce the growth of mould in their homes. We have a SAN-AIR gel which you can place in your air conditioner and this will blow particles from the gel into the air in your home,” he adds. “Avoid using bleach altogether as mould can use it to grow,” he adds. “When used in combination, the SAN-AIR products will effectively reduce the growth of mould in your home.”

Why is it important to get rid of mould in your home?

It’s important to make sure you don’t have mould growing in your home because studies have found there’s a link between mould – and the mycotoxins which mould produces – and cancer. We’ve known about this link for some time but a recent Finnish study examined tumour tissue from a patient for the presence of aflatoxin, a recognised carcinogenic mycotoxin. They found there was a higher level of aflatoxin in the DNA of the tumour tissue than there was in the normal tissue from the same person. So voila – there’s now a link between breast cancer and mould.

As well as this link between mould and cancer, there’s also a full range of other symptoms which people experience when they’re exposed to mould. These symptoms include coughing, postnasal drip, sneezing, dry, scaly skin, itchy eyes, nose, or throat and nasal congestion. For asthma sufferers, mould can trigger an attack in the form of wheezing, shortness of breath, coughing or chest tightness.

The World Health Organisation stated in 2009 that any exposure to mould poses a health risk. Further research has also suggested that people exposed to mould in their homes often report symptoms of anxiety and depression.

This information about the health issues which can result from exposure to mould in your home, show just how important it is to prevent mould from growing in your home.

For more information about how the range of SAN-AIR products can assist in killing and cleaning mould in your home, visit here.

FAMOUS Lego® Artist are heading to Chattanooga, TN For one Weekend JANUARY 28-29, 2023

FAMOUS Lego® Artist are heading to Chattanooga, TN For one Weekend JANUARY 28-29, 2023