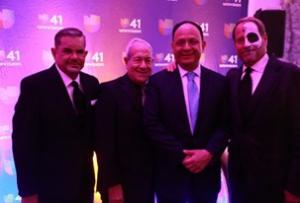 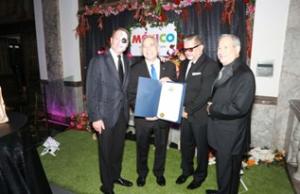 “Visit Mexico USA was proud and honored to again bring the Cena Negra evening to New York City, and to share the holiday of the Day of the Dead with 150 distinguished guests. 48 Wall Street and the Grand Banking Hall provided the ideal setting for the food, art, music and guests who enjoyed the second annual tradition for New Yorkers in celebration with our Mexican neighbors. We look forward to Cena Negra for many years to come to further the bonds between Mexico and the United States,” said Kent M. Swig, Visit Mexico USA Chairman.

Televisa Univision, the exclusive media partner for the Cena Negra dinner capped a weeklong series of “Mexico Week” events in New York City. The Cena Negra event took place on Tuesday, November 1st at 48 Wall Street, in the Grand Banking Hall within this historic building located in FiDi (Financial District) of Manhattan and was fully themed for the Day of the Dead. The Day of the Dead is a unique celebration in the world and represents the heritage, culture, gastronomy, and traditions of the Mexican people, as families create altars adorned with candles, flowers, photographs, food and drinks for the loved ones who are offered the altar with the belief that that night their souls will return to celebrate with the living ones. Traditions range from preparing food and offerings at home to taking them directly to cemeteries. A common theme of the festivities is the varied gastronomy and celebratory atmosphere that will be replicated at the Cena Negra in New York.

The Day of the Dead celebration in New York promotes and encourages Mexican-Americans living in the United States to honor the traditions and richness of Mexico as a tourist destination rich in culture and history. All of these cultural milestone events increase the presence of the Mexico brand and awaken the desire to travel to Mexico once again for Mexican Americans. In addition, this traditional celebration creates new interest for New Yorkers and all United States citizens to explore the beauty and wonders of Mexico.

Visit Mexico USA was formed by Kent M. Swig, Gary K. Levi, and Alvaro Vitolo to market and promote visitor travel to Mexico. The three principals have decades of experience in the hospitality, tourism, real estate, marketing, and government sectors of the economy. With their respective backgrounds, they bring to this collaboration a wealth of knowledge to effectively create the visibility and awareness necessary to substantially increase business and tourism interest in Mexico. In addition, with this first international office of the Visit Mexico brand, the three principals have assembled an executive team that includes the best leaders in the leisure and travel and branding industries.

As the leading Spanish-language media and content company in the world, TelevisaUnivision features the largest library of owned content and industry-leading production capabilities that power its streaming, digital and linear television offerings, as well as its radio platforms. The Company’s media portfolio includes the top-rated broadcast networks Univision and UniMás in the U.S. and Las Estrellas and Canal 5 in Mexico. TelevisaUnivision is home to 36 Spanish-language cable networks, including Galavisión and TUDN, the No. 1 Spanish-language sports network in the U.S. and Mexico. With the most compelling portfolio of Spanish-language sports rights in the world, TelevisaUnivision has solidified its position as the Home of Soccer. TelevisaUnivision also owns and manages 59 television stations across the U.S. and four broadcast channels in Mexico affiliated with 222 television stations, Videocine studio, and Uforia, the Home of Latin Music, which encompasses 57 owned or operated U.S. radio stations, a live event series and a robust digital audio footprint. TelevisaUnivision is home to the global streaming services ViX and Blim TV, which altogether host over 50,000 hours of high-quality, original Spanish-language programming from distinguished producers and top talent. The company’s prominent digital assets include Univision.com, Univision NOW, and several top-rated digital apps. For more information, visit televisaunivision.com

This year American Airlines celebrates 80 years of service in Mexico. American is the leading U.S. airline in the country operating up to 114 daily flights to 27 cities and is home to more than 1,100team members. This year the airline will continue strengthening its footprint in Mexico including daily service from New York (JFK) to Mexico City (MEX) and Monterey (MTY) launching on November 3.