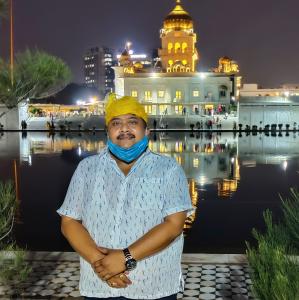 Ratikanta Kanungo is a humanitarian and social worker who has worked for Orissa’s welfare for many years. He has been involved in many relief activities.

BHUBANESWAR, ODISHA, INDIA, November 16, 2022 /EINPresswire.com/ — Some gestures are hidden from the public, but they have to be widespread so people can know who was there for them in their bad times.

Natural Disasters are not in someone’s control, but providing help to people who suffered from that disaster is. A natural disaster is “the negative impact following an actual occurrence of natural hazard if it significantly harms a community” A natural disaster can cause loss of life or damage property and typically leaves some economic damage in its wake. The severity of the injury depends on the affected population’s resilience and the infrastructure available.

Ratikanta Kanungo is a humanitarian and social worker who has worked for Orissa’s welfare for many years. He has been involved in relief activities in the region during calamities. Recently when the flood hit the Garadpur region of Orissa, then the first person apart from the administration who helped people recover from the disaster is Ratikanta Kanungo. He reached there on time with his team and started relief works for the people of Orissa.

Heavy monsoon rains in mid and late August 2022 in Odisha state resulting from the deep depression over the Bay of Bengal have led to overflowing rivers and landslides affecting at least 13 districts. Its impact has led the state government to open the Galudih Barrage, releasing floodwaters into Odisha and worsening the flood situation.

The floods have severely affected Boudh, Cuttack, Jagatsinghpur, Kendrapara, Khurda, Puri, Sambalpur, and Subarnapur districts, with Puri and Jagatsinghpur being the most affected.

Ratikanta Kanungo provided food and shelter to all those affected by floods. He also provided medicines and other necessary items to them so that they could recover soon from their injuries caused by flood water.

Ratikanta Kanungo, the Congress Committee member, is known for his social work. Kanungo is known for raising social issues via his films and providing humanitarian aid to needy people. He is also an active member of the Congress party and has held many positions in it.

Ratikanta Kanungo aims to provide quality education to poor children at affordable rates by starting schools under his name.

Kanungo has been working for more than 20 years in the field of education and is passionate about helping children from poor backgrounds receive a good education. He believes that education is a fundamental right and one that should not be denied by economic status or location.