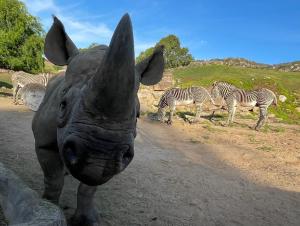 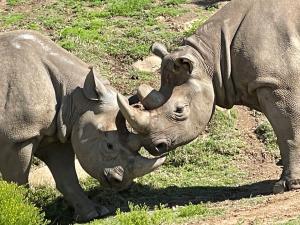 Once again Pacific Air Cargo is thrilled to be a part of the Honolulu Zoo’s desire to continue their conservatism and protection of animal populations. We are honored to play a role in their efforts.””

HONOLULU, HAWAII, UNITED STATES, November 16, 2022 /EINPresswire.com/ — Pacific Air Cargo has been delivering its share of precious cargo this year. On Tuesday, November 15, the air freight company helped to deliver Kendi, a male Rhinoceros to the Honolulu Zoo from Los Angeles. Kendi, an Eastern Black Rhinoceros, was born in Cincinnati on July 17, 2017, and had been living at the San Diego Zoo Safari Park until the transport. He will be joining his mate, Aria, who was sent to the zoo in late September.

At 5 years old, Kendi weighs approximately 2,205 pounds. Both Kendi’s and Aria’s transfers to the Honolulu Zoo are part of the highly successful American Association of Zoos and Aquariums (AZA) Species Survival Program (SSP). The Honolulu Zoo is optimistic that the pair will successfully produce offspring while in their care.

The International Union for Conservation of Nature Red List has the Eastern Black Rhinoceros listed as critically endangered due to poaching. Its population suffered a severe decline of more than 90%, resulting in less than 800 animals remaining in 2010, and due to staunch conservation efforts, has now increased to a population of approximately 5,500 animals.

The Eastern black rhino is the smaller of the two African rhino species, the other being the white rhino. It stands up to five feet high at the shoulder and approximately 12 feet in length. They weigh up to 3,000 pounds, have three tows, thick dark brown to gray colored skin, and two fibrous keratin horns. They are best distinguished from the white rhino by its pointed, rather than square upper lip and live up to 35 years in the wild and up to 50 years in human care.

“We are very grateful for Pacific Air Cargo’s generous contributions and commitment to animal conservation, and team of staff who assisted with Kendi’s transport, making this the fifth complimentary transport (two giraffes, a hippo and two rhinos) since 2020,” said Honolulu Zoo Director Linda Santos.

Kendi and Aria will be housed in the newly renovated rhino exhibit in the African Savanna near the play apparatus at the Honolulu Zoo.

Founded in 2000, Pacific Air Cargo (PAC) provides exclusive Boeing 747 express air cargo services six days a week between Los Angeles and Honolulu, with onward connections to Hawaii’s neighbor islands, weekly services to Pago Pago (American Samoa) and Guam, and US mainland road feeder service to many gateway locations. Pacific Air Cargo CEO, Tanja Janfruechte and her professional, friendly team have had a long and well-respected history of reliable, on-time service to the air freight markets in Hawaii, the United States mainland, and throughout the Pacific. Pacific Air Cargo was named as one of the Top 10 Freight Forwarding Services in the Nation in 2022 by Logistics & Transportation Review.

Jon Rahm rips Official World Golf Ranking over ‘laughable’ changes: ‘I think they have made a mistake’

Jon Rahm rips Official World Golf Ranking over 'laughable' changes: 'I think they have made a mistake'