Women and Minorities Enjoy a Strong Quarter in Investment Crowdfunding 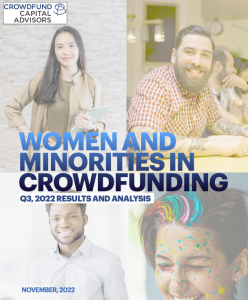 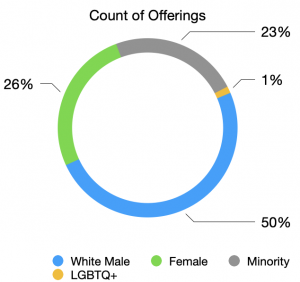 New report details women and minorities accounted for more than 50% of all quarterly offerings, nearly 50% of the capital, and 80% success rate.

Essentially, we have a proven solution to the funding gap that exists for female and minority entrepreneurs. All we need to do now is bring more eyes and ears to the opportunity.”

DENVER, CO, UNITED STATES, November 15, 2022 /EINPresswire.com/ — A new report by Crowdfund Capital Advisors highlights the opportunity investment crowdfunding represents for women and minority founders. Investment crowdfunding allows startups or small businesses to raise $5M online annually from friends, family, followers, and customers. Since it started in 2016, nearly $2B has been invested in over 3,800 companies across the United States. Many of these companies will go on for follow-on financing rounds, mergers, or acquisitions, representing potential gains for investors.

Q3 was another strong quarter. Women and minority founders represented over 50% of all offerings, raised nearly 50% of the total capital, and had a higher than-industry-average successful funding rate.

“While more women and minorities are coming to investment crowdfunding for capital and tend to run companies with greater sales and fewer losses, they are trailing their white male counterparts regarding capital raised, the number of investors, and valuation,” says Sherwood Neiss, Principal at Crowdfund Capital Advisors. “The data, however, shows that the gap is closing. At least within investment crowdfunding.”

• In total, 55% of all offerings had at least one woman or minority founder.
• 28.5% had at least one woman, 25.2% had at least one minority founder, and 1.3% had at least one LGBTQ+ founder.
• Among the minority founders, 16.9% were African American, 6% were Asian, and 2.3% were Hispanic.
• Wefunder hosted the most women or minority issuers for the quarter, followed by StartEngine and Mainvest.
• 81% of all women and minority offerings were successful in their raise compared to an industrywide average of 69%.
• Women, minority and LGBTQ+ founders raised $46.9M, representing 47.8% of all the capital funding in Q3, from over 36,000 investors.
• There were examples of women and minority founders all raising more than $1M; this includes African American, Asian, Hispanic, and LGBTQ+ founders.
• While female founders had an average success rate higher than their white male counterparts, they raised, on average, 28% less cash.
• Investors nearly deployed the same amount of capital into white male founders as they did to minorities, showing how investment crowdfunding can narrow the funding gap for women and minorities.
• White men still got a better deal regarding company valuations, with the only caveat being Asians, who had the highest valuation of any minority.

“It would appear that we no longer need to search for solutions to the women and minority funding gap,” says Sherwood Neiss, Principal at Crowdfund Capital Advisors. “The data shows that within investment crowdfunding, they are succeeding at a greater rate and raising more money than ever. We need concerted marketing efforts by governmental and nongovernmental organizations to make women and minorities aware of this opportunity.”

The full report is available for purchase on Crowdfund Capital Advisors’ website.

Moving Beyond the Secret Art Sale

Behind the Scenes Facts, Insights, Reams of Third-Party Research on Manufactured Homes, and ‘Mobile Home’ Controversies