Emboldened by Support from a U.S. Congressman, Somaliland’s President Cancels Election and Extends his Rule by Two Years 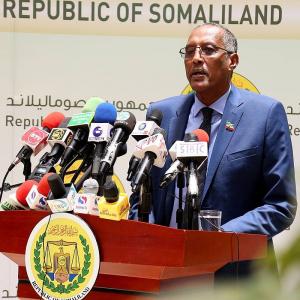 Muse Abdi & his ministers do not have the legitimacy to continue running the country in accordance with the Constitution. Continuance of his administration is tantamount to rule by force and autocracy”

WASHINGTON, D.C., DISTRICT OF COLUMBIA, UNITED STATES, November 14, 2022 /EINPresswire.com/ — Von Batten-Montague-York, L.C. is deeply concerned about the escalating troubles in the separatist region of Somalia called Somaliland and believes that support from a member of the U.S. Congress has emboldened Somaliland’s President Muse Bihi Abdi’s repressive and undemocratic actions.

There is deep concern by pro-democracy activists in Somaliland that the political troubles in Somaliland may result in President Abdi using the Somaliland security forces to again crush political opposition to his attempt to remain in power without an election. There is cause to be worried. As reported by Reuters on August 12, 2022, President Adbi’s security forces opened fire on pro-democracy protestors, killing five people and injuring 100 people.

The Somaliland government has been accused of nepotism, corruption, human rights violations, and the arbitrary arrest and imprisonment of journalists. As reported by the U.K.’s Guardian newspaper, the government of Somaliland is among a group of governments discovered giving questionable gifts and donations to members of the U.K. Parliament. According to the United Nations, “Somaliland security personnel continue to attack media freedoms by harassing, intimidating, and arbitrarily arresting an increasing number of journalists.”

President Adbi’s dictatorial actions have continued to increase since he received support and assurances from a handful of Republican members of Congress. President Adbi is lobbying the U.S. House of Representatives and the U.S. Senate for funds, weapons, and recognition of Somaliland as an independent country separate from the Federal Republic of Somalia in exchange for giving the U.S. Department of Defense access to a seaport and airfield overlooking strategic maritime routes. Republican Congressman Scott Perry of Pennsylvania’s 10th district introduced H.R. 7170 – Republic of Somaliland Independence Act.

Von Batten-Montague-York, L.C. has been briefing congressional representatives of the escalating events in Somaliland and will continue to advise Congress and the Biden Administration to proceed with caution regarding establishing relations with the Somaliland regime.

The weblinks to the noted news articles and UN report are noted below.

Always Flavored Adds Spice to Its Grand Opening on Nov. 20

Always Flavored Adds Spice to Its Grand Opening on Nov. 20