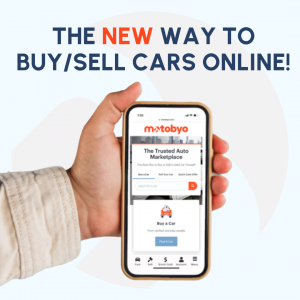 Motobyo is the new, tech-driven and consumer-focused way to buy and sell used cars online.

PHILADELPHIA, PENNSYLVANIA, UNITED STATES, November 14, 2022 /EINPresswire.com/ — Motobyo, the online used car marketplace that launched in the Greater Philadelphia region this summer, has further enhanced the tech start-up’s ties to its hometown through its sponsorship of Philly car clubs and support for their charitable initiatives.

This past Veteran’s Day weekend, Motobyo sponsored their fourth event with one of the Philadelphia area’s top car clubs, 2 Infamous 4 Da Streets, which hosted its year-ending “Cruise Night” on Saturday, November 12th at La Placita in the city’s Fairhill neighborhood.

The fourth car “Cruise Night” of the year welcomed all makes and models of cars, and proceeds from the event benefited Open Arms of Nicetown, a transitional /Emergency Housing center for Veterans in the Kensington section of Philadelphia. Open Arms of Nicetown’s focus is to reduce homelessness among the veteran population and aid veterans in maintaining a productive lifestyle.

Motobyo has sponsored all four of 2 Infamous 4 Da Streets “Cruise Night” events, in which car owners exhibit their handiwork in transforming their autos into show cars. The car club, in its 16th year, is one of the most popular and diverse in Philadelphia.

“Our club was founded in 2006, and our members come from a variety of neighborhoods in the city to bond over cars of all kinds,” said Mercedes Valle, President of 2 Infamous 4 Da Streets. “We bring a family-friendly, safe and entertaining event to our neighborhoods, and bring a positive opportunity to neighborhoods to enjoy a fun day. We’ve been able to raise funds at our events for Children’s Life at Children’s Hospital of Philadelphia and the St. Francis Inn soup kitchen, and this event will raise funds for homeless veterans through Open Arms of Nicetown.

“Motobyo has been very supportive of our events this year, and we are grateful for their sponsorship of our four events this summer and fall,” Valle added.

In addition to their sponsorship of the Kensington-based 2 Infamous 4 Da Streets, Motobyo is sponsoring the Los Atrevidos Car Club’s annual Toy Drive on December 3rd in Philly’s Huntington neighborhood, among other events.

Through their sponsorship of Philadelphia-area car clubs, Motobyo supports each group’s charitable cause, as well as bringing positive, family-oriented special events to some of the city’s underserved neighborhoods.

Launched in Philadelphia this summer, Motobyo is an automotive e-commerce marketplace, not a dealership. By connecting everyday sellers and buyers, Motobyo eliminates auto industry middlemen, creating efficiencies that give real value back to the consumer.

To see how Motobyo enables both used car buyers and sellers, visit http://www.motobyo.com.

Friday the 13th brought Aliyyah Koloc a top 10 finish; Valtr and Šoltys helped each other out of trouble