New Book! “On the Outside Chance” 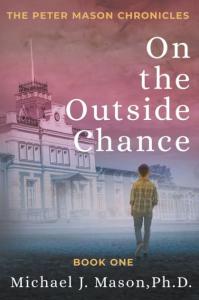 Certainly, I hope readers will learn more about the plight of the disabled and the difficulties faced by people with cerebral palsy.”

MIDDLEFIELD, CONNECTICUT, UNITED STATES, November 14, 2022 /EINPresswire.com/ — Peter Mason was trapped in a body that was his worst enemy, and born into a world that didn’t care.

Now, Peter’s harrowing, inspirational story—based on the true story of Dr. Michael J. Mason—is told in the new book, On the Outside Chance (Evolved Press; 2022), the first of three books in the Peter Mason Chronicles.

On the Outside Chance details the early life of Peter Mason, born to affluent Manhattan parents in the early 1950s. An accident at birth leaves Peter afflicted with cerebral palsy, a condition that ravages the boy’s body, but leaves his mind intact.

Unfortunately for the Mason family, the 1950s and 60s is a time during which little is known about cerebral palsy or the special needs of the disabled. Among adults, the disabled are largely neglected and ignored, and often hidden away to live lives of quite misery. Among Peter’s peers, his condition makes him a pariah. His classmates at the upper-class private school he attends treat him with scorn and derision, and his everyday life is one of mockery, ridicule, and abuse.

Peter’s home life offers him little respite from his problems: When his mother, the only person to truly care for Peter, comes down with a debilitating illness of her own, Peter’s relationship with his father frays and dissolves, and the boy finds himself alone in a world that cares little about his life or his future. A sympathetic psychologist, however, gives Peter the chance to heal his tortured soul, allowing him to find a path that will help him deal with his problems and become not only a successful student, but a whole and fulfilled adult.

Peter’s plight largely follows that of Dr. Mason himself, who created Peter as a semi-fictional character to help him better tell his own story. “I’m no longer that miserable young boy,” Mason said. “He’s a wholly different person than I am now. Creating Peter and giving him the problems I dealt with then was a way for me to more effectively tell his story now. It allowed me to plumb the depths of his existential threat and show how he found his way out of his own misery.”

Inspired by the psychologist who saves him, Peter sets himself on a path to help people. Eventually, Peter transforms himself from a bitter, angry boy to a young man who not only makes friends at school, but finds direction in his life. He becomes a motivated student with a promising future. His life still has plenty of obstacles ahead, but he is now equipped with the tools he needs to face his challenges.

“I hope that as readers vicariously live Peter’s journey with him, as he learns to deal with his burden, they’ll be inspired to take a positive role in dealing with their own existential threats,” said Dr. Mason, who is himself a Columbia University graduate and a successful psychologist.

“Peter’s story is everyone’s story,” Mason said. “Certainly, I hope readers will learn more about the plight of the disabled and the difficulties faced by people with cerebral palsy. But more than that, I hope people will see Peter as an example of how, with the right support, anyone can overcome their own personal existential threat and live happy and fulfilling lives.”

Dr. Michael J. Mason was born with cerebral palsy during a time in which awareness for the needs of the differently abled was virtually non-existent. Despite the hardships he faced, Mason molded himself into an extraordinary student, and went on to earn two master’s degrees from Columbia University and a Ph.D. from New York University. He became a successful psychologist, devoting his career to improving the lives of both disabled and able-bodied people. He lives in Westchester County, NY and County Kerry, Ireland.

ON THE OUTSIDE CHANCE