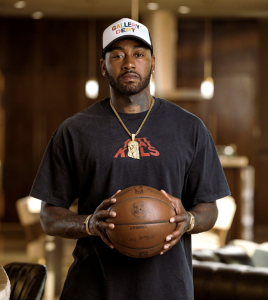 Wall explains, “I am happy to be a part of the Ethika family. We have been working and already have two great projects coming out so it’s going to be dope.”

Wall joining the LA Clippers serves the next chapter of his basketball career. In recent years, Wall has faced adversity. From tearing his achilles to losing his mom to breast cancer, the 6-3 guard has endured and persevered.

However, his ability to overcome any obstacle thrown his way is what makes his partnership with Ethika, the go-to underwear brand for artists, athletes, and entertainers, second to none. Beyond his undeniable talent on the court, the five-time All-Star is also known for his influence. But more importantly, Wall is driven by his commitment to family and community, something tried and true to Ethika’s core values.

“John Wall and I met after being connected on a group text and we hit it off immediately,” shares Darius Burton, Ethika’s Director of Brand Partnerships. “At the time, John was still in DC with the Wizards and he invited me out for a JWFF (John Wall Family Foundation) community event, and that’s something that Ethika believes in.”

With family as the driving force behind Wall’s philanthropic efforts, joining the Ethika Familie and becoming one of the faces of the brand was an easy partnership. “We were able to come to an agreement easily because the relationship had been established years ago,” shares Burton. “John Wall has been wearing Ethika since he was fresh out of college, so having him design his own staple pairs was too easy.”

With Ethika landing another top NBA player, John Wall’s “Familie Recipe” collection has finally arrived, showcasing the things that matter to him most, like creating staples. As Ethika continues to set the new standard for brand partnerships, it’s exciting to see how Wall’s influence will add on to the Familie’s pursuits for quality, style, and originality.

The Ethika Familie is made of individuals who stand out from the crowd, and we’re ready for you. Maybe it’s a talent that makes you one of the best in the world, or maybe it’s an inner drive for success and individuality, but at the core we all share the same demands for quality, style, and originality. Below are some of the more recognizable faces that have been with Ethika through the years. As soon as you put on your first pair of Ethikas, you too have joined the Familie alongside a group of elite athletes, artists, employees, and friends.