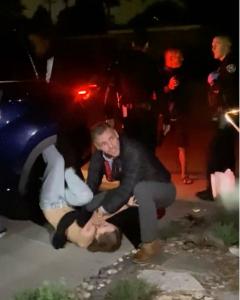 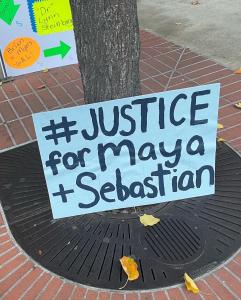 Video of two Santa Cruz children being violently removed from their home, received over 5 million views and put a spotlight on reunification camps, a lucrative yet controversial, unregulated industry.”

LOS ANGELES , CALIFORNIA, UNITED STATES, November 14, 2022 /EINPresswire.com/ — Family court advocates across the state are mobilizing to hold a protest on Thursday, November 17th, from 8:30 a.m. to 11:00 a.m. at the Stanley Mosk Courthouse in Los Angeles in honor of Family Court Awareness Month. The family court system is arguably one of the most important branches of our judicial system, tasked with ensuring the safety of the most vulnerable members of our society. This system is not acting in the best interest of children and continues to prioritize parental rights over child safety.

The University of Cincinnati Nathanial R. Jones Center for Race, Gender, and Social Justice’s 2019 survey demonstrates that mandates for judicial officer training on domestic violence vary by state. Some states do not have any training at all. In the states with requirements for judicial training, the requirements are frequently minimal for domestic violence training without a requirement for a minimum number of hours. Domestic violence is one of society’s most serious problems, and it permeates throughout our society in the shape of child abuse, mass shootings, homelessness, murders, and pervasive violence against women. ( https://ucracegendersocialjustice.com/wp-content/uploads/2019/12/judicialtrainingsurveyarticlefinal.pdf )

The protest is also being held to raise awareness about the abusive nature in which two children were removed from their preferred parent in Santa Cruz, California, on October 20, 2022. Siblings Maya and Sebastian Laing were violently removed by a transport agency and taken to a reunification camp in Southern California. This incident has sparked international attention. The videos have gone viral, generating over 5 million views in just two weeks, and have increased public awareness of reunification camps which are a lucrative industry yet highly controversial, unsound, and unregulated (https://www.nationalsafeparents.org/awareness-building-history-of-parental-alienation–reunification-camps.html).

Many times, before children are sent to a reunification camp, they have lodged allegations of abuse against one parent and are vocal in their preference to stay with the other parent. This was reported by the Center for Investigative Journalism aired on public radio’s Reveal program. (https://revealnews.org/podcast/bitter-custody/) Even the United Nations Human Right’s Office of the Commissioner acknowledges that family courts have a “tendency to dismiss the history of domestic violence and abuse in custody cases extends to cases where mothers or children have brought forward credible allegations of child physical or sexual abuse.” (https://www.ohchr.org/en/calls-for-input/2022/call-inputs-custody-cases-violence-against-women-and-violence-against-children) In the case of siblings Maya and Sebastian Laing, the children made allegations of abuse against their mother and asked to remain living with their father. Then the court ordered them into reunification therapy and, ultimately, a reunification camp.

Reports on reunification camps describe a scenario where children are physically removed from their preferred parent and, at times, prohibited from having contact with their preferred parent for days to years. We know from previous investigations by the Washington Post that the program in Southern California, where Maya and Sebastian were taken, begins with a 4-day intensive.

Judge Leon Firtel state that most of “the judges in general don’t know that [there are no phones, no contact] at all” when they make these orders on the Reveal broadcast. In the Washington Post Article, Loudoun County (Va.) Circuit Court Judge Burke McCahill tells of learning how the children he ordered to participate in reunification therapy at Family Bridges were traumatized and he came to regret that he “let those children experience something as traumatic as that.”

Reunification camps are part of a larger industry of institutions that experts compare to for profit prions due to their use of strict and outdated methods for working with children and the billions the industry receives in public funding every year. (https://www.vice.com/en/article/5d3kad/paris-hilton-sexual-abuse-provo-canyon-school) We know from the research done over decades that children placed in out-of-home care are a singularly oppressed group. (https://web.archive.org/web/20210227192801/https://cyc-net.org/cyc-online/cyconline-dec2009-snow.html) Just look at the stories of survivors of boarding schools for ‘troubled teens’ like Provo Canyon, as reported by The New York Times. (https://www.nytimes.com/interactive/2022/10/11/opinion/teen-mental-health-care.html) Paris Hilton, a survivor and former student of Provo Canyon, is now an advocate for the overhaul of the policies that prop up this industry marred with abuse allegations. Paris is not alone in this fight. The non-profit Breaking Code Silence collects and amplifies survivor stories, advocates for change and provides important research. (https://www.breakingcodesilence.org/)

“While I have spent many years hearing the horrors of reunification therapy and reunification camps, nothing could have prepared me for what I witnessed in the video of Maya and Sebastian being viciously assaulted by camp transporters. Had any other adult treated a child this way, they would be behind bars on felony child abuse charges,” states Tina Swithin who has served as a family court advocate for over a decade. Swithin goes on to say, “if these children were treated in this fashion with witnesses and cameras recording, I shudder to imagine what happens behind closed doors.”

Our goal for Family Court Awareness Month 2022 is to spotlight that our family court system’s lack of sufficient and appropriate training. Family court professionals are not receiving training on the topics that they encounter every day, including domestic violence, child sexual abuse, physical abuse, emotional abuse, trauma, coercive control, as well as victim and perpetrator behaviors.

Swithin’s organization, One Mom’s Battle, Inc. invites all community members, media, supporters, and survivors to join together for a demonstration at the Stanley Mosk Courthouse in Downtown Los Angeles on Thursday, November 17, 2022, from 8:30 a.m. to 11 a.m. (https://familycourtawarenessmonth.org/events/los-angeles-protest) The organizers demand an investigation into the Laing children’s violent removal and call for accountability and criminal prosecution. Ultimately, the group wishes to see an end to reunification camps.

See and hear Maya Liang tell her story in her own words including leading up to the court order by Judge Rebecca Connolly ordering Maya and Sebastian to the reunification camp and the forceful transport of the children.

Reunification Camps: The Story of Maya and Sebastian Laing