Queen of the Underground Art World 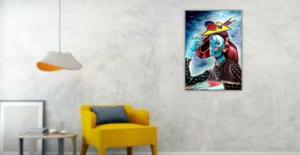 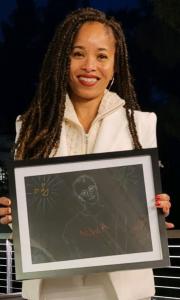 SILICON VALLEY, CALIFORNIA, UNITED STATES, September 30, 2022 /EINPresswire.com/ — The term Underground art reeks of a foul odor amongst the art Establishment Gatekeepers; yet, it is the hottest, hippest, and most expensive art around.

Every morning she curates her Underground Art Pinterest Board. This Underground Art Pinterest Board has eight sections. These sections are Buying and Selling Art, The Art Market, NFTs, Digital Art, Comic Strip/Graphic Novels, Street Art, Graffiti, and Prison Art. Her interest in this side of the world of art began after striking up a pen pal with a prison artist she had discovered on the website Wire of Hope.

In 2004, she volunteered as a Court Appointed Special Advocate (CASA), with the Santa Clara County Superior Court. CASA is a national association in the United States that supports and promotes court-appointed advocates for abused or neglected children. CASA are volunteers from the community who complete training that has been provided by a state or local CASA office. Volunteers are appointed by a judge, and their role is to gather information and make recommendations in the best interest of the child, keeping the child’s personal wishes in mind. After ensuring her CASA advocate graduated high school, upon turning 18, he aged out of the foster care system. Smith then went through the courts to have him legally adopted as her son. Unfortunately, mental illness would become a large contributing factor that led her son to receive a five year prison sentence. A prison sentence and run in with the law occurring right on the heels of the sudden heart attack and death of her twin brother Dan.

“I was feeling pretty bummed, my brother had died, and my son was telling me stories about prison that I didn’t know how to help him,” says Smith. “That’s when I reached out to a prisoner for some guidance, I lucked up and found a true change agent in the world of art, despite being in prison.”

California prison artist Donald “C-Note” Hooker has become the most important Emerging artist in the last five years. His works have changed lives, saved lives, raised millions of dollars for rehabilitation and restoration, made history in the fashion world, had a work displayed on a public mural as Street art, and is the first prison artist to have his work displayed on two Billboard Art Installations in 2021 and 2022.

Besides being an award-winning visual artist, C-Note is a poet, playwright, and performing artist, whose Works have either been exhibited, recited, performed, or sold, from Alcatraz to Berlin.

It was through these written correspondences with C-Note that she learned of the great influence Graffiti had on Jean-Michel Basquiat, and that the Father of the Graffiti movement in the United States, Darryl “Cornbread” McCray, learned of, and was given instructions on tagging (graffiti) while serving time in a North Philadelphia prison for youth. It was even the location where he received his tagging (graffiti) name, Cornbread.

Other notables from the world of Prison art and its influence on the broader world outside of prison, was being the origin source for rapping in Hip Hop music, and the proliferation of body Art (tattoos) amongst inner city youth.

One notable prison artist is former federal prisoner Jesse Krimes, whose massive artwork Apokaluptein:16389067 (2010-13), took three years to make, was smuggled outside of the prison because it was being created on the bed sheets that belonged to the Federal Bureau of Prisons, and many times these bed sheet smuggling operations took place with the assistance of the prison guards. It wasn’t until after he was released that he was able to see his Dante’s Inferno inspired work in its completed form.

In 2021, Silk Road founder, and federal prisoner Ross Ulbricht’s pencil drawing on paper of an eyeball that he titled, “Perspective,” sold at Art Basel, Miami, as an NFT for $6.2M. It was Ulbricht’s first NFT offering, and in 2022, federal prisoner Anna Delvey is purported to have sold $500,000 in Art Prints.

Nicole R. Fleetwood, the inaugural James Weldon Johnson Professor at New York University’s Steinhardt School of Culture, Education, and Human Development, and former Professor of American Studies and Art History at Rutgers University, spent nearly a decade to write, “Marking Time: Art in the Age of Mass Incarceration.” Her efforts paid off with a heap of awards, including the prestigious MacArthur Fellowship, also known as the “Genius Grant.”

Here, Fleetwood is photographed holding “C-Note on Haring,” a work of Wax on canvas by prison artist C-Note. The work features Keith Haring wearing a NWA (Niggas With Attitude), insignia shirt. NWA is the Los Angeles based Hip Hop group whose rap lyrics caused a formal rebuke by the FBI in the form of a letter to their record label, an FBI first! This letter now rests proudly at the Rock & Roll Hall of Fame. Haring was a highly visible advocate of the Hip Hop movement. Other features of “C-Note on Haring,” are the background images of drawings stylized after Haring’s famous style; he even includes the iconic “Haring Baby.”

To learn more about Underground Art, be sure to check out Anna D. Smith’s Fine Art and Real Estate Broker, Underground Art Pinterest Board. You won’t want to miss the pinned post, “Inside the Underground Art Vault at Christie’s,” where a $50M lesson of art value is taught in four minutes.

coop & spree launches coop convos, a business and retail podcast with a pinch of basketball