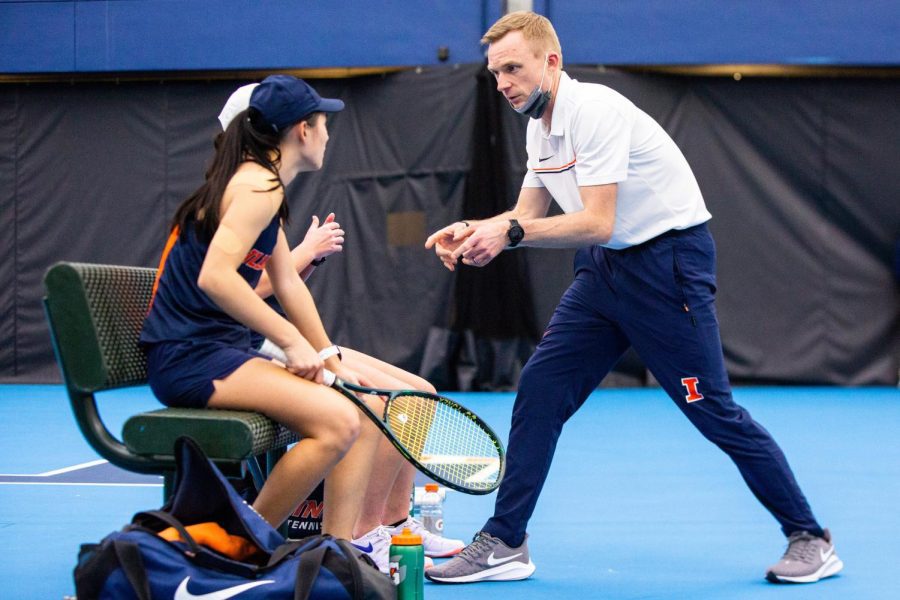 Women’s Tennis head coach Evan Clark heads over to have a quick chat with athletes on Feb. 6, 2021. Clark opens up about the team not being found on the upcoming NCAA tournament and taking advantage of the upcoming season to continue to improve.

When current head coach of Illinois women’s tennis Evan Clark took over ahead of the 2016–2017 season, an immediate impact was seen. In Clark’s second year as head coach, Illinois tied the program’s record for most wins in a season (22) and earned their first NCAA tournament appearance since 2012.

During Clark’s third season, the Illini made the Big Ten tournament finals for the first time since 2001 and returned to the NCAA tournament.

Unfortunately for Clark, the next two seasons were marred by COVID-19, with the 2019–2020 season being outright canceled midway through the year and the 2020–2021 season being limited to conference play only.

Coming off of two highly irregular seasons, Illinois women’s tennis rebounded with an overall record of 16-9 and a 8-3 record against Big Ten opponents in 2022, in what was also their first conventional season since 2019.

Illinois’ impressive record of 8-3 in the Big Ten placed them in the middle of a three way tie for third place in the conference with Wisconsin and Northwestern. Ultimately, Northwestern was given the tiebreaker and selected to represent the Big 10 at the NCAA tournament over the Illini.

While many an Illinois diehard may choose to blame the selection process for excluding Illinois from the NCAA tournament, Clark says it’s the team’s job to take full advantage of every opportunity to climb the standings during the season.

“Obviously when you look at the selection process you can always nitpick and you can sit there for days and say hey this team is deserving and this team’s not,” Clark said. “The one good thing about our system is it’s pretty black and white. They go straight off the rankings and we just missed the cut. That’s our job to be ranked a little bit higher and to win a couple more matches and we knew we could do that”

One such missed opportunity may have been when Illinois faced Penn State in early April. At the time, Penn State had an overall record of 9-9 and a record of 3-3 against Big 10 opponents, while the Illini were 13-6 and 6-1 respectively. Despite being the better team, Illinois lost the match 3-4 and suffered their second of just three overall league losses on the season.

When looking back on the season and the three way tie Illinois eventually found themselves in, winning this match against Penn State would have been the difference between being selected for the NCAA tournament.

Despite missing the tournament due to key losses, Clark is confident in the direction the Illini are headed in.

“We’re moving in the right direction … Certainly last year was better than the previous two years,” said Clark. “ We knew we could do that (make the tournament) so it’s frustrating for us. I think it’ll make us hungrier.”

As the Illini look to improve for next season, they will be doing so with a lot of familiar faces. The Illini are losing one senior, Shivani Ingle, and as a result are only gaining one freshman, Violeta Martinez.

This level of fluidity is a rare sight in any sport, and is an advantage the Illini will hope to capitalize on as they look to make a return to the NCAA tournament next season.

On this day in 2012: Nicola Adams makes Olympic history in London